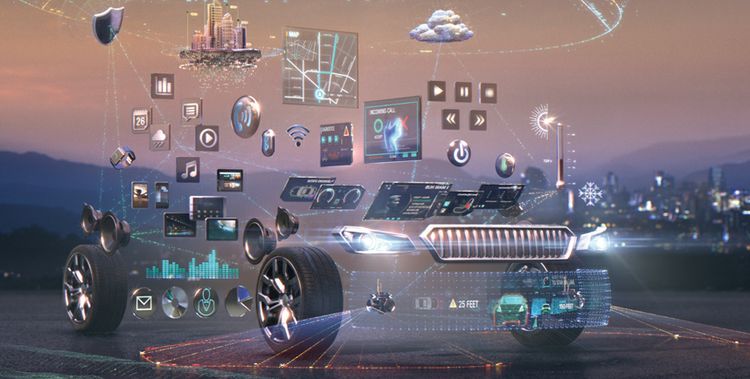 The connected car revolution is here and soon we could see these machines evolving during their own lifecycle thanks to over-the-air software updates.

Connectivity is rapidly transforming the way we consume goods. It’s even challenging the very concept of ownership, as the template set by mobile devices spreads to other aspects of our lives through the Internet of Things.

One of the biggest potential markets for this new way of doing business is the automotive industry.

For the first century or so of its existence, the car was essentially a commodity. Consumers would buy a certain model with a fixed specification and live with that until they replaced the whole thing. Warranty claims and service plans aside, contact between the manufacturer and the consumer generally ended with the completion of the sale, as did the value chain that it implies.

But things are starting to change, thanks in part to the IoT. As connectivity becomes an increasingly important part of the driving experience, manufacturers are rapidly devising ways to monetise the services they can offer. Subscriptions are now available for everything from navigation systems to concierge services that will book you a nearby hotel.

The range of services is already expanding dramatically. BMW, for instance, now offers support for the SmartThings app, which means you can change your household heating settings or even pre-heat the oven from the comfort of your car’s dashboard.

Such things may be the preserve of tech-savvy early adopters at the moment, but they’re set to find their way into the mainstream. Here at Harman, we expect in-car connectivity to rise from 10 per cent today to 90 per as soon as 2020. At that point most new cars should support the major connectivity protocols and enablers for the IoT.

With the use of over-the-air updates even the fundamental specification of the car can be reconfigured. Perhaps the most dramatic example of this so far is Tesla, which limits the charge capacity of its vehicle’s batteries using software and offers owners the chance to upgrade using an OTA update.

This can be carried out anywhere in the world and virtually any time the vehicle is offline – for instance while it’s parked in the garage overnight. When you think about it, this is a seismic shift – historically, the only way to add 25 per cent to a vehicle’s range overnight would have been to sell it and buy a new one.

It’s not hard to see how upgraded functionality could be applied to other aspects of the vehicle. It’s quite common for some models within a manufacturer’s range to share the same engine hardware with different software calibrations to differentiate their power outputs.

Following this business model, a customer could upgrade to a higher power output or perhaps a more fuel efficient setup part-way through their ownership.

Again, it opens up an ongoing acquaintance with the customer that used to lie more or less dormant in between car purchases.

The best way to provision and manage these services is with OTA updates. In the next few years it’s likely we will be able to draw an increasingly direct parallel to the mobile space, where companies like Apple and Google are already using this technology to deploy new experiences to their customers.

Using this technology to future-proof the car may even become essential. The number of electronic modules in vehicles will continue to increase as they move towards full integration with the IoT. That will mean more software to update, more to manage and more to secure.

Another factor that will drive this need for up-to-date information and services is the arrival of autonomous driving functions. The technology behind self-driving cars is 90 per cent software and it’s evolving all the time.

Again, to see how far we’ve come you only need to look at Tesla’s Autopilot function or the recent announcement from Ford that it plans to have totally driverless cars on the roads by 2021.

The Ford proposal centres around a ride-sharing platform – similar to Uber – operating in a geographically constrained urban environment. What’s significant, however, is that the company plans to do away with the manual controls altogether; it will be a fully autonomous car driven only by software.

That’s the way the industry is heading and it means the scope for OTA updates will be enormous.

One particularly important area that OTA will support is the dissemination of up to date, high definition maps. They are a fundamental building block in the progression of autonomous driving, as approximately 12 per cent of roads change each year.

For example, not having the knowledge that a road has been converted to being just one-way street could have disastrous concequences. What we’re able to do today at Harman – through the service delivery platform that is part of our automotive cloud value proposition – is provide enterprise-class services to connected cars by deploying the data as a layer that sits above the current system.

For instance, if you were adding the ability to display real-time traffic information to a navigation system it could resemble small icons rendered on top of the existing screen. For the OEM it means you don’t have to redesign the driving experience to add a new feature.

Clearly, one of the most important tasks is maintaining security. Very broadly, that falls into three categories:

Harman has developed a number of sophisticated security systems to tackle these threats. Key to defence of our connected car systems is what we term the 5+1 Cyber Security Framework.

This relies on a defence-in-depth concept, with five main layers:

This network protection layer is comprised of two embedded elements developed by Harman’s TowerSec brand, known as EcuShield and TCUShield. These are designed to detect, mitigate and eliminate threats in real time, while logging data to strengthen future systems.

EcuShield can be embedded into the vehicle’s existing modules to detect and prevent intrusion of the local networks. TCUShield, on the other hand, protects telematics control units, in-vehicle infotainment systems and other connected devices from external threats. Together they provide a complete intrusion detection and prevent system.

Last but by no means least, the “plus one” element is OTA functionality for the security system itself. This allows the installation of security-related updates and patches to guard against zero-day vulnerabilities or any security flaw that may be detected in the field.

The mobile industry provides a number of fascinating parallels for connected cars. One of those is discretisation of products and services. Just as users may change their mobile devices frequently while maintaining subscriptions to the same core services, we could see the same begin to happen in the automotive industry.

As more and more of the car’s product DNA is laid down in software it will be increasingly easy for that to migrate between hardware platforms. It will mean that the car can tailor its driving environment automatically.

Everything from the seat settings and the default media playlist through to the performance on offer could be configured to suit the individual users, as recognised by a key or a mobile app.

This would apply equally well whether they were family members, fleet users in a business or perhaps total strangers subscribing to a car sharing app. Ultimately it could have a profound effect on our view of car ownership.

Even the buying experience is changing, as manufacturers begin to ‘insource’ the sale of vehicles via online purchasing. This initiates that digital partnership between the customer and the original equipment manufacturers right at the start of the experience and it’s likely to appeal strongly to millennials, who already buy a majority of their goods online.

It’s clear the world is changing. There are undoubtedly new challenges to overcome, but also a huge number of new opportunities as cars begin to tap into the IoT. The revolution is here, and it’s only going to get bigger.