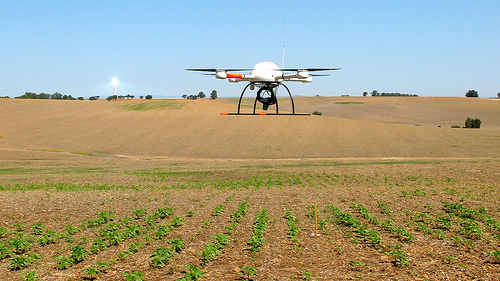 It may once have been the preserve of the military, but drone technology is now an important tool for businesses throughout the UK. Companies in many different sectors are increasingly using Unmanned Aerial Vehicles (UAVs) to give them a commercial edge.

Who uses drones for commercial use?

Media agencies, for instance, are using drones to produce dynamic advertising footage, or to support news reporting, along with photographic agencies, which employ drones to provide stunning panoramic shots and pictures from previously inaccessible places.

Elsewhere, for property agents, a drone can offer new angles that reveal a property’s scale, as well as features that may not be obvious at ground level.

Construction companies and architects can use drones to produce site surveys and incredibly detailed 3D models, and even farmers can use this technology to monitor crops and livestock.

What’s more, the benefits that a drone brings to security companies in terms of crowd monitoring and surveillance can’t be overstated.   This boom in the commercial use of drones is only going to grow in the coming months and years – so taking advantage of this technology right now can give you a commercial edge.

The first step is to obtain a licence from the Civil Aviation Authority (CAA) to use a drone commercially, but what happens if something goes wrong?

So just as with any other essential business asset, you can’t afford to leave your drone uninsured.   Drone theft is also sadly increasingly common.

What’s more, even if your stolen UAV is eventually recovered, the waiting time for the police to track down your stolen device can be significant.

Insuring against theft makes sense for any commercial drone operator.

While accidental damage and theft are the most well-known general risks, there are several other issues that commercial UAV users should be aware of, the most serious being the risk of collision.

As the skies grow more crowded, aerial near misses are becoming commonplace, and there are plenty of cautionary tales about UAVs coming close to causing major accidents.   The financial and legal cost of being involved in a collision can be dramatic.

Pilots whose UAVs cause serious injury or damage are obviously likely to face serious financial consequences. As the CAA comes under increasing pressure to seek prosecutions, penalties for such incidents are likely to get stiffer, so it’s crucial to be protected.

As if that wasn’t enough to be concerned about, you should also consider that drones generate a certain level of noise. This can lead to you or your company being charged with causing a nuisance or noise pollution, again leading to additional costs, not to mention reputational damage.

Finally, it is a legal requirement that all commercial drone operators have Public Liability insurance which complies with EC 785/2004.

EC 785/2004 requires you to have a minimum level of public liability cover but it must also cover terrorism, war and hijacking. All Insure4Drones policies comply with this requirement and it’s something which isn’t normally covered outside of a specialist drone insurance policy.

For drone operators using a standard business Public Liability insurance, it is vital they check it covers these things as they are normally excluded, meaning the operator is not complying with the CAA requirements.   We understand the key risks associated with using drones commercially.

Our specialist drone insurance is tailored to commercial operators, so whether you are working in construction, farming, the media or other areas of business, we can give you peace of mind.

Get an instant quote today and let us help find the right cover for you, so you can get on with running your business, safe in the knowledge that when it comes to UAV use, you are fully protected.