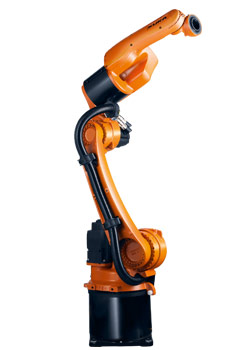 Kuka has presented its new Cybertech range of industrial robots for the first time, choosing the China International Industry Fair in Shanghai as the venue for the launch.

The company says the “Cybertech Nano” robots can be used in a variety of applications, including loading and unloading of machines and for welding operations.

Kuka’s brand ambassador Timo Bell – the famous table tennis player – was scheduled to present at the event, and will be helping to demonstrate its other established robot range, the KR3 Agilus.

The Cybertech range includes nine robot types, and have payload intervals of 6, 8 and 10 kg. Kuka adds that they have a repeatability of approximately 0.04 mm.

The company boasts that it “has redefined the parameters for the performance of low-payload robots.”

It adds that the robot has new controller structures.