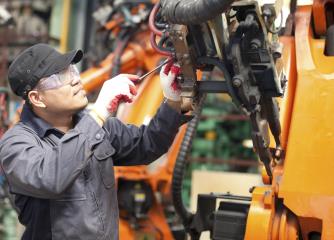 Most stories have at least two sides, usually one negative and one positive, depending on your point of view or what aspect of the story you choose to highlight.

So, for example, if you read CNN you will see mentions of “record” levels of business, such as in the sectors of automaking and aerospace.

“US aircraft production is at a record high and well ahead of the rest of the world,” says CNN, adding that the auto industry is “within 7 per cent of record levels, making 12 million cars and trucks a year”.

But if you click over to Bloomberg, it’s the opposite view. Under the headline, “No, US manufacturing isn’t really booming”, the article displays a graph of long-term decline in employment in the manufacturing industry.

However, Bloomberg does go on to show in other graphs that total manufacturing output has been increasing significantly, with computer and electronics sectors performing particularly well.

But even on the subject of productivity, there can be other interpretations, such as the one to be found on Trading Economics, which says US manufacturing growth has slowed to a three-month low.

According to the US Bureau of Labor Statistics, the number of people employed in the manufacturing sector has indeed fallen slightly in the past month, after increasing steadily over the past few months.

Compared to September 2015, approximately 40,000 fewer people were employed in manufacturing in September 2016.

These could be argued to be relatively small fluctuations but as mentioned, US manufacturing has seen monthly increases in employment for the past few years, so it would be interesting to see if this slight drop becomes a trend over the next few months.

The Bureau of Labor figures don’t provide any direct correlations relating to why jobs increase or decrease, but  does separately produce statistics on workers in the industrial machinery sector.

The Bureau of Labor says 464,400 people were employed in the industrial machinery sector in 2014, and forecasts that number to increase by 73,400 in the subsequent decade.

This may be an underestimate if the onshoring trend continues to grow.

The machines are back

Founded in 2010, the Reshoring Initiative aims to bring back jobs lost to low-wage countries around the world back to the US, and its own figures would indicate that the plan has been working.

In fact, it’s worked so well that the Reshoring Initiative claims that no jobs were lost to overseas manufacturers in 2015.

Heralding a “new dawn for manufacturing careers in America”, the Reshoring Initiative says companies are starting to use total cost of ownership calculation methods to decide whether to take manufacturing offshore – or not, as is increasingly happening it would appear.

“Net annual job loss to offshoring went from around 200,000 in 2003 to zero today,” claims Reshoring Initiative in an infographic the organisation has produced.

The top 10 reasons for reshoring, says the organisation, are: