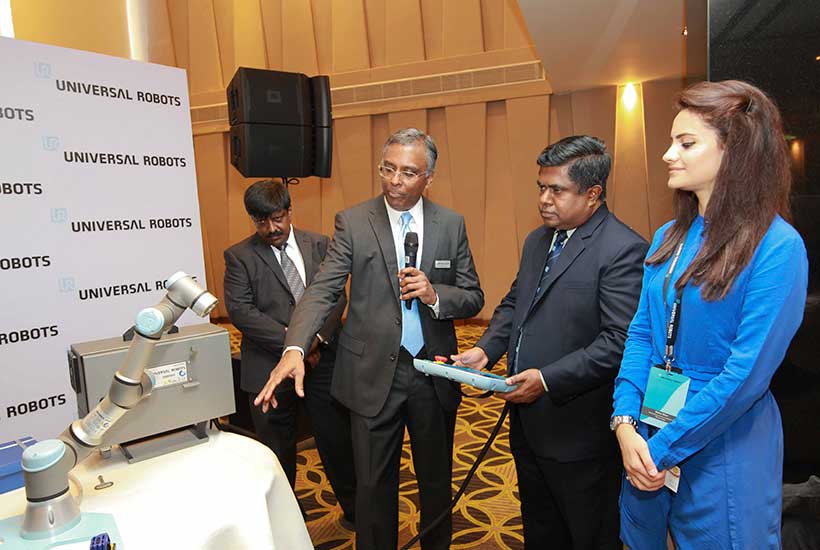 The event was attended by the key stakeholders that define this technology, including the general manager of the company in the India and Sri Lanka region, and a host of other dignitaries representing the government and customers.

Collaborative robots, as the name suggests, are a technology upgrade from industrial robots which are designed to collaborate and work with humans and assist them in a variety of tasks.

Cobots can be especially useful in ensuring a safe work environment, which can also help automate and streamline repetitive and potentially unsafe processes, while acting as a helping hand to increase productivity and efficiency.

For a country like Sri Lanka, which is looking at a fast pace of development and at the same time would like to adopt cost effective, yet efficient technology, cobots would be the right way to go, especially for the small and medium-sized enterprises which form a major part of the business eco-system.

Dr Esben Ǿstergaard, founder of this technology and the chief technology officer of Universal Robots, says: “We are happy to have contributed to the evolution of robots in the past and we will strive to nurture it and take it to the next step with human robot collaboration.

“Collaborative robotic technology can be used to benefit all aspects of task-based businesses irrespective of their size. Our robot arms are advanced tools that can be used by all levels of production staff to help increase productivity, and quality.

“Our collaborative robots will help to ease out processes in task driven industries like manufacturing, assembly and food processing. However we have seen lot of out of box applications due to the ease of programming of our cobots.”

Speaking at the launch event at the Hilton Colombo, Pradeep David, general manager, Universal Robots says: “The growth of the economy of a nation, would be gauged by increasing productivity in industry as a whole and in future cobots would be a critically important factor as human-robot collaboration is an integral part of Industry 4.0.

“In a developing economy like Sri Lanka, automation in every field will enhance production and generate advancements in the technological sector. With the launch of cobots, companies would be able to enhance productivity levels close to 85 per cent.

“Collaborative robotic technology can be used to benefit all aspects of task-based businesses irrespective of their size. We have a full-fledged application lab setup in Bengaluru (Indian headquarters) with a UR3, UR5 and UR10 for customer training and proof of concept purposes.

“We are delighted to be able to provide the platform required for the Sri Lankan market for increasing productivity, quality, and market competitiveness.”

These cobots are utilized for an assortment of out-of-box functions ranging from photo shoots, bartending, fashion shows, coffee machines, surgical procedures and even for physiotherapy and sports therapy procedures.

Examples of cobots being used in various off-beat industries

According to a research conducted by capital goods analyst Barclay’s, the global co-bot market is set to grow from $116 million last year to a whopping $11.5 billion by 2025 at a annual growth of over 50 per cent.

Another study conducted by MIT researchers on the success and adaptability of cobots at a BMW factory, proved that teams made of humans and robots collaborating efficiently can be around 85 per cent more productive than teams made of either humans or robots alone. Also, the cooperative process reduced human idle time by virtue of its pace-setting ability.

Universal Robots, since 2005, has been working on developing compact, user-friendly collaborative robots to make advancements in the field of automation and to bring automation in various verticals of different industries. Persistent efforts resulted into the evolution of robot arms – UR3, UR5 and UR10 which can carry a payload of 3 kg, 5 kg and 10 kg respectively.