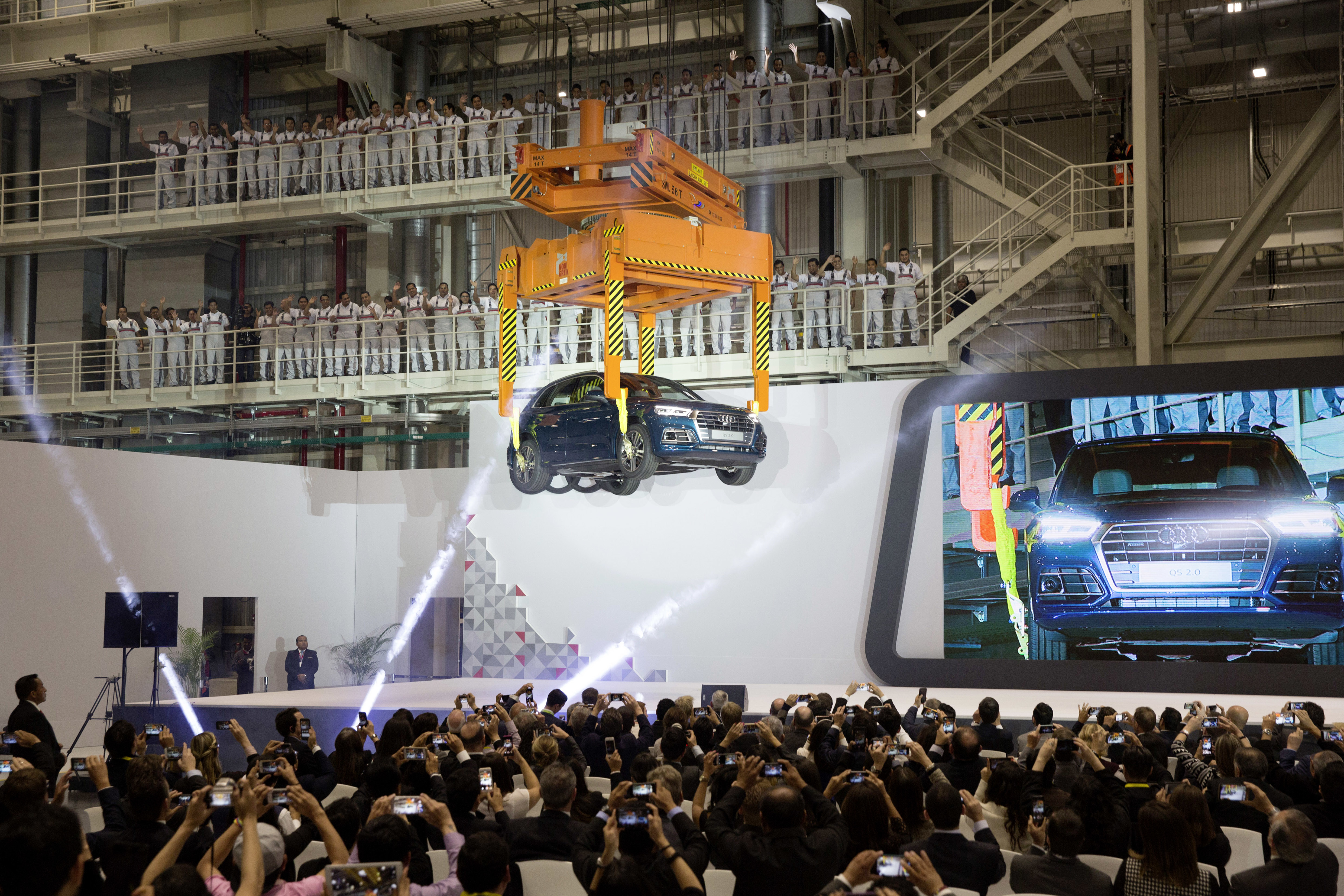 Audi bigwigs opened what the company claims is the first manufacturing plant to be opened in Mexico by a premium automobile manufacturer.

Moreover, the company says the facility is one of the most advanced in the world, and is classed as a “smart factory”.

The company says the new development represents the further expansion of its worldwide production network and enables Audi to continue along its path of global growth.

Senior members of Audi’s board of management opened the factory, which is the company’s first automobile plant on the North American continent.

Starting immediately, the brand with the four rings will produce the new generation of the Audi Q5 for the world market in San José Chiapa in Mexico’s federal state of Puebla.

The plant has an annual production capacity of approximately 150,000 premium SUVs. By the end of the year, a total of 4,200 jobs will be created locally at Audi México.

Audi claims it is the first premium automobile manufacturer with product facilities in Mexico.

Professor Rupert Stadler, chairman of Audi, says: “The plant in Mexico is a milestone in the history of our company and an important step in our internationalization.

“It is one of the most modern factories on the American continent. With this facility, we have established an important site for the export of our automobiles to customers all over the world.”

Audi considers Mexico to be a powerhouse for automobiles and automotive components. The country has 12 free-trade agreements with more than 50 countries and therefore offers ideal economic conditions, adds Audi.

During the opening ceremony, Stadler was accompanied by his board colleagues: Prof Dr Hubert Waltl, head of production and logistics and also chairman of Audi México; Prof Thomas Sigi, from Audi’s human resources, and Dr Bernd Martens, from procurement.

Stadler ceremonially gave the signal for the official start of production of the new Audi Q5. Stadler says: “For us, this plant is more than a financial investment of over one billion euros. Above all, it is a commitment to the site and to the people who, together with us, have managed this great achievement.”

Waltl, says: “Our plant in Mexico is a prime example of the Audi Smart Factory. The facility is the first that we have put into operation completely virtually, that is, in a computer simulation.

“We have optimized the entire process chain and put the plant into operation 30 percent faster than is usual.”

That was a record in the automobile industry, he adds.

Audi says it has applied “state-of-the-art technology” in the factory planning. The plant first took shape in great detail in virtual space, where factory planners from various sites were able to work on the plant structure simultaneously.

As a result, Audi was able to set up a complete car plant with a press shop, body shop, paint shop and assembly line on an area of 400 hectares (988 acres) in the record time of just three and a half years.

Various water treatment methods and the application of new technologies in the paint shop will enable the plant to be free of wastewater.

A supplier park has been established immediately adjacent to the park. Seven suppliers and logistics providers have started operations there in time for the start of production of the Audi Q5.

The “JIS” (just in sequence) park guarantees short distances from the suppliers’ buildings to the assembly line and allows punctual delivery of components for the premium SUV.

At the start of production, Audi is sourcing more than 70 percent of the parts from the Nafta region and plans to increase this proportion of localization over the long term. In total, more than 100 companies already supply parts for the Audi Q5 from sites in Mexico.

In line with its social responsibility, the company also supports the people in the region. Audi México has so far taken more than 3,300 local employees on board.

In addition, Audi has provided advance training at its sites in Germany to more than 750 Mexican employees, who were assisted by experienced mentors.

The new Audi Q5 combines the sportiness of an Audi sedan with a versatile character and a highly variable interior, says the company.

Whether in terms of connectivity, efficiency or driver assistance systems, the “SUV with the Four Rings sets new standards in its segment”, according to Audi.

To date, the company has delivered 1.6 million of the Audi Q5 to its customers worldwide, making the model the most successful premium SUV in its segment.

The Audi Q5 is also still produced at locations in China and India for those local markets.