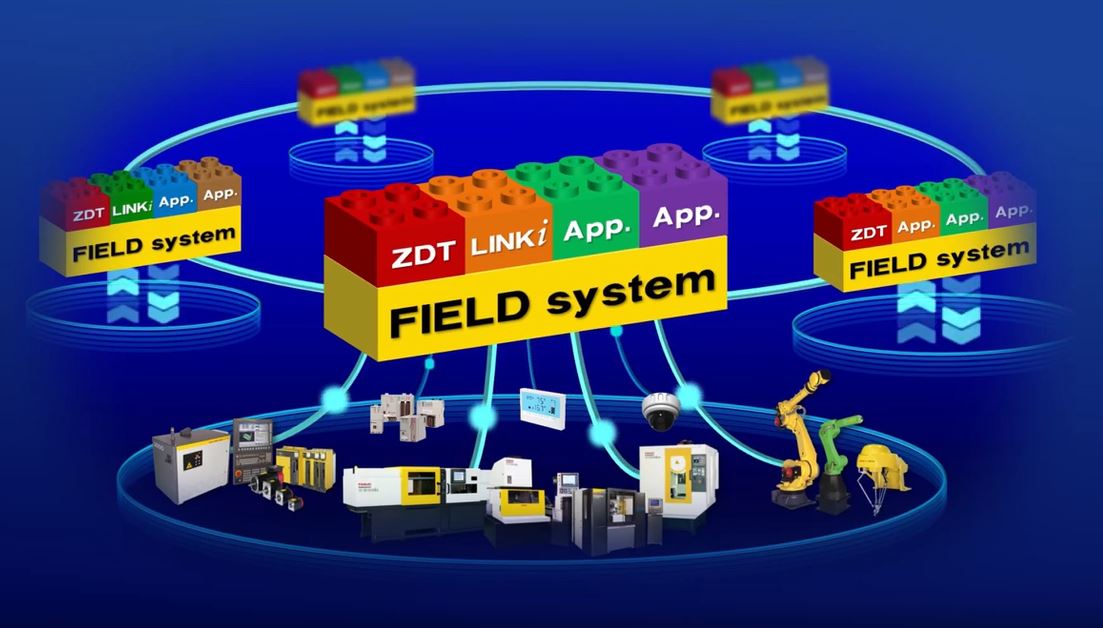 Fanuc claims the Field system allows applications such as Zero Down Time, or capabilities such as deep learning or machine learning to be applied in the edge level of a factory site.

The Field system is based on Edge computing where a large amount of data is processed within the manufacturing site, minimizing the volume and cost of sharing data, while also providing a secure connection to the cloud for suitable applications.

The data that is on the Field system from various machines can also be used for collaboration among equipment, performance optimization, improved traceability and quality control.

Fanuc collaborated on the development of Field with Cisco, Rockwell Automation, and Preferred Networks, a provider of artificial intelligence solutions.

Field consists of hardware and software that allows multiple external computing devices to be added to the plant network in a highly secure manner.

The software suite is composed of both open source and proprietary licensable products – from Cisco and Preferred Network.

Once the Field software is loaded and configured, the machine data from all the automation equipment including CNC machines and robots can then be accessible to application developers through an open application programming interface (API).

The easy access to machine data significantly reduces the effort for a third party to develop applications to run on the Field system, providing a variety of monitoring, analytic and real-time functions.

At IMTS, Fanuc demonstrated Field’s connectivity to a versatile range of products including CNCs, robots, RoboMachines, and Rockwell Automation programmable automation controllers (PACs), using a variety of monitoring/data collection protocols including Fanuc’s MT-Link i and RoboMachine Link i, EtherNet/IP and HTTP.

Joe Gazzarato, director of product development, Fanuc America, says: “Field is the next generation of intelligence for Fanuc.

“We’re showing customers that the Field system will enable new applications that can drive significant improvements in machine reliability, quality, flexibility and speed to elevate manufacturing efficiency and profitability.”

The Field system is scheduled for release by the end of the year.

Fanuc’s Zero Down Time is an application that runs on Fanuc’s Field system, currently collects data from more than 6,000 robots in 26 factories.

Fanuc says ZDT monitors these robots to see if the application is causing abnormal wear that could lead to a failure, and if so, Fanuc sends parts with support to address the issue before any downtime occurs.

As the Field system and ZDT grow in the marketplace, Fanuc will be able to help more customers with intelligent condition-based maintenance notifications and help optimize the performance and life of their robots.

At IMTS, a ZDT data collector running on a Cisco server collected data on all robots in the Fanuc booth and sent it to the cloud. Monitors showed what Fanuc says are the benefits of ZDT and each robot’s health data available in the cloud such as RV, motor, E-stop, energy usage, maintenance reminders, and so on.

ZDT also collected and monitored data in the cloud for robots at ACME Manufacturing, Rockwell Automation, and Methods Machine Tools. A Cisco 809 router running Fanuc’s ZDT data collector will send messages from those external booths to the Fanuc ZDT data center in the cloud for analysis and reporting.

Gazzarato adds: “The convergence of Internet of Things and industrial manufacturing has begun. Connectivity to equipment on the factory floor is growing at a rapid pace.

“This connectivity opens the door to new sources of data enabling applications that can leverage this data to deliver real business value.”