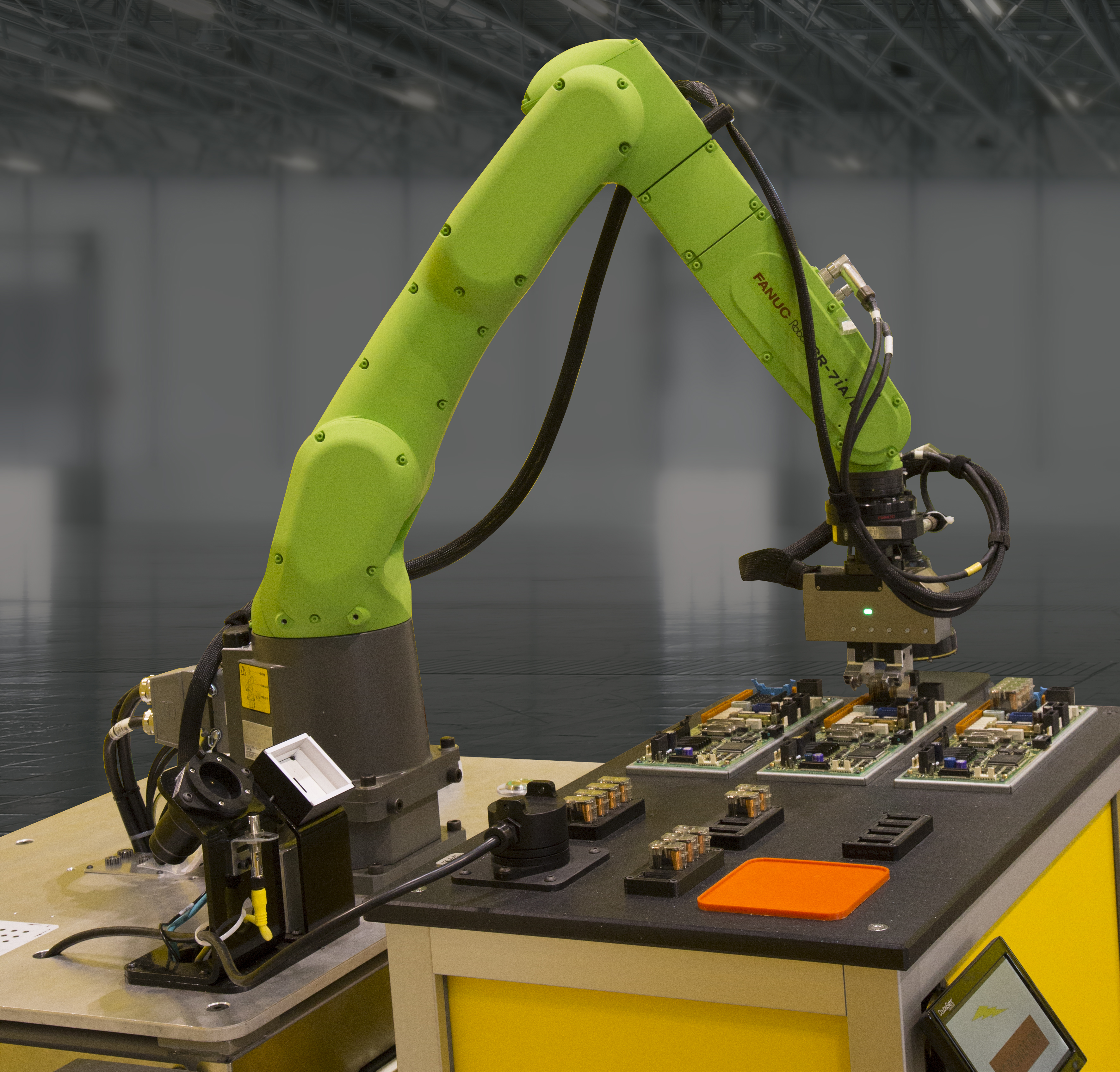 “This is a major safety and cost benefit as it allows the robot to perform more strenuous tasks or repetitive operations without the need for expensive industrial safety barriers.”

Fanuc showcased its new products at IMTS, where its demonstrations included applications in a range of areas, as detailed below.

First, the robot used iRVision to pick planet gears from a rack and use the Fanuc FS-15iA force control sensor to insert the gears into a gearbox to build three assemblies. The robot the disassembled the gearbox.

Next, the robot moved to a second station and picked a relay, presented it to an error proofing camera to verify that the part is acceptable, then inserted the relay into a circuit board.

The robot then disassembled the circuit board and the cycle repeated. The cell featured the new robot’s capabilities to safely interact with an operator, handle different part types, and work on a mobile platform.

The new Fanuc CR-4iA collaborative, robot mounted to a pedestal and equipped with a Rockwell Safety Area Scanner, demonstrated the robot’s high-speed mode and contact-stop mode.

Fanuc says visitors were able to experience the “high sensitivity” of the robot’s contact stop and push-to-escape features. In addition, the cell showcased the CR-4iA’s tap-to-resume feature.

A Fanuc CR-35iA collaborative robot equipped with iRvision picked an unfinished motor from a pallet and placed it at a work station where an operator attached several parts on the motor’s shaft as the robot retrieved a second motor.

The robot placed the second motor on the work station, then picked and rotated the completed motor, allowing the operator to attach an inspection tag.

The robot then transfered the completed motor to a finished motor pallet. After three assemblies were complete, the operation is done in reverse. This cell featured very close human/robot collaboration in an interactive application.

“The highly-sensitive robot gently stops if it comes in contact with the operator, allowing the robot and human to work side by side.”

Fanuc based its design for the new compact collaborative robot series on the widely popular LR Mate-series of mini material handling robots. The new robots are ideal for small part sorting and assembly, inspection, machine tending and part delivery.

All of Fanuc’s collaborative robots are green to distinguish them from the standard yellow Fanuc robots.

The new CR-7iA, CR-7iA/L, and CR-4iA collaborative robots provides a wide range of features and benefits, including:

The CR-35iA collaborative robot features six-axis articulation. A soft green cover protects workers who are in direct contact with the robot.

The CR-35iA robot was developed to help manufacturers solve ergonomic challenges by handling applications that are physically demanding for humans, such as heavy lifting. In the automotive industry, for example, workers are required to lift spare tires into vehicles on the assembly line.

“The CR-35iA can work alongside the employees assigned to this task to help reduce injuries associated with repetitive or heavy lifting,” said Buell.

Certified to meet the requirements of ISO 10218-1:2011 and RIA/ANSI R15.06-2012, Fanuc’s CR-35iA collaborative robot can work in a variety of applications alongside human workers including: machine tending, handling heavy payloads that require lift assist devices or custom equipment, higher payload mechanical assembly, palletizing or packing, and tote or carton handling.

Fanuc says the CR-35iA robot offers a wide range of collaborative and safety features and benefits, including: