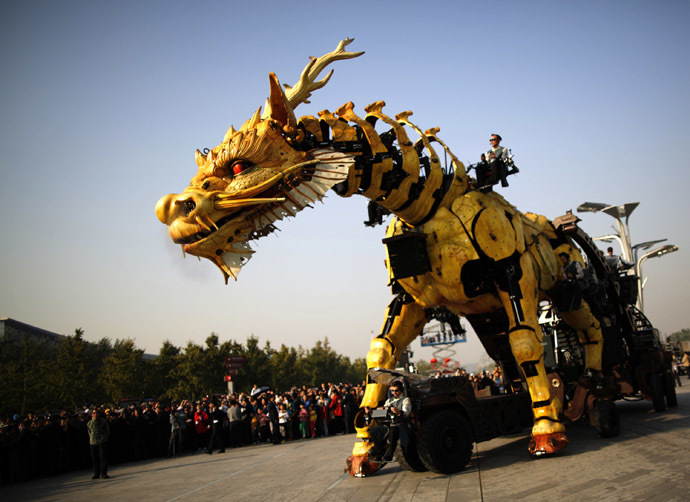 Towards the end of last year, the nominally communist Chinese government announced that it wants China to become the world’s largest producer of industrial robots.

In comments made in the past few months, China’s President Xi Jinping and Premier Li Keqiang have clearly stated their intention to embrace robots and the new industrial revolution brought about by internet connectivity and artificial intelligence.

In a speech to the Chinese Academy of Sciences, Jinping called for a “robot revolution”, saying: “Our country will be the biggest market for robots, but can our technology and manufacturing capacity cope with the competition? Not only do we need to upgrade our robots, we also need to capture markets in many places.”

And speaking at the China Association for Science and Technology conference in Beijing, Keqiang said the conference will “spur the the growth of the emerging robot industry and create the world’s largest robot market”.

It was one of a series of statements Keqiang made about robots towards the end of last year. In another one, he said countries should open up markets and share robotic technology for mutual benefit, adding: “China, with a more open gesture, would like to welcome robot experts and entrepreneurs across the world to share knowledge and cooperate with us.”

Jinping, too, emphasises China’s willingness to co-operate with foreign companies on robotics research and development.

Since those comments were made by Keqiang and Jinping, data produced by the International Federation of Robotics suggest that China is now the world’s largest market for industrial robots.

IFR statistics indicate that Asia’s voracious appetite for industrial robots has made it the fastest-growing market in the world.

And, having purchased approximately 70,000 industrial robots in 2015, according to IFR estimates, China, the second-largest economy in the world, currently buys more industrial robots than any other country, surpassing the whole of Europe, which bought around 50,000.

As well as the country’s leaders articulating their ambitious framework for making China the world’s largest robot manufacturer, the people charged with making it happen have put some numbers on the chart.

As reported by IFR, Wang Ruixiang, president of the China Machinery Industry Federation, says the country aims to increase annual sales of domestically produced industrial robots to 100,000 units by 2020.

And the China Robot Industry Alliance is promising to “vigorously promote” advanced manufacturing technology and robots.

While China’s leaders might be dreaming of leading their country to global dominance in robot manufacturing, the reality is that the most advanced scientific knowledge and technological expertise currently resides outside the country.

Ever since Keqiang and Jinping made their overtures, globally pre-eminent robot manufacturers have made in-roads into China, sharing their expertise and entering into joint ventures.

One way to establish a working relationship might be through companies such as Transcosmos, which could be described as a digital marketing agency, but is also able to provide technical business expertise.

Transcosmos designs manufacturing processes. One of its clients is Mitsubishi Aircraft, for which it helps manage its design development. The Chinese unit of Transcosmos recently celebrated its tenth anniversary, and specialises in computer-aided design for engineering applications.

Meanwhile, Swiss robotics and automation multinational ABB is one company which has made headlines with its business activities in China.

Although it’s been making most of its money from power-generation projects in China, ABB Robotics recently signed a deal with Chinese communications giant Huawei to develop industrial automation solutions, specifically connecting ABB robots through the internet of things.

ABB also has several other ongoing partnership agreements in China.

Investment view from inside China

According to Edward Tse, CEO of the Gao Feng Advisory Company, doing business in China is too difficult for many businesses.

In comments to Robotics and Automation News, Tse says there are now three distinct groups of multinational companies in China which he classifies according to their market views:

While foreign multinationals look into China for investment opportunities, Chinese companies are looking outwards to the rest of the world.

One clear sign of this is the recent takeover of German robot-maker Kuka by Midea, a Chinese manufacturer of household appliances, for approximately $5 billion.

Midea is something of a giant and could be on the lookout for more robotics and automation companies to buy, as well as develop its own robot models. Furthermore, it has long-standing business partnerships with one of the other giants of robot manufacturing, Yaskawa.

Yaskawa is Japanese, and its president, Hiroshi Ogasawara, told Nikkei.com that it has two joint ventures with Midea, and that the Kuka purchase does not affect those.

Ogasawara says: “One of the two joint ventures manufactures industrial robots. It was established in the fall of last year. Yaskawa has a 51 per cent stake. Robots produced there are all for Midea. They are used to automate Midea’s home appliance manufacturing facilities.

Japan, of course, is one of the leading robot-manufacturing nations, along with the US and Germany. How long China will take to catch up is open to question, but catch up it almost certainly will.

While the micro-economics look promising for China, with the creation of many thousands of jobs within the robotics and automation industry pretty much a certainty, what may be more of a concern is the macro-economic picture that is already becoming clear.

Foxconn, the Taiwan-headquartered company which makes Apple devices, recently fired 60,000 out of 110,000 human workers at one of its factories in China and replaced them all with robots. Foxconn says it plans more of the same, making many thousands more robots, which will inevitably mean many more thousands of job losses.

China claims to be a communist nation, which would imply that it would ensure that its people have jobs and bosses can’t just fire them at will. But instead of supporting workers’ rights, the government seems determined to introduce robots everywhere, which will almost certainly lead to millions of people finding themselves out of work.

Encouraged by party leaders, local governments are introducing robotics and automation initiatives across the country. One single project will replace at least 2.5 million workers in one province alone, according to the communist country’s propaganda outlet Xinhua.

The country’s unemployment rate is around 4 per cent, according to Statista. That’s about 60 million people with no work. And now that the robots are marching in, that number could well go much higher.