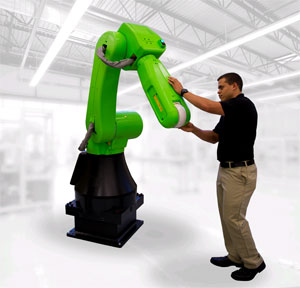 Fanuc has set a new world record for production of over 400,000 robots.

“This demand has stimulated production of industrial robots in general, and has played a major role in Fanuc achieving this milestone, and maintaining our position as the world’s number one supplier of factory automation and industrial robots.”

“From a product standpoint, the recent drivers behind reaching this milestone have been the popularity of the Fanuc R-2000iC series, the LR Mate 200iD series, and the new CR-35iA, collaborative green robot,” added Cicco.

The R-2000iC is a family of industrial robots, including pedestal and rack mount versions with a variety of payloads designed for material handling and welding applications.

The family of LR Mate 200iD mini-robots is a versatile and cost-effective solution for a wide range of manufacturing operations, including those requiring access into small spaces.

The new CR-35iA robot is the industry’s first 35 kg payload force limited collaborative robot designed to work alongside humans without the need for safety fences.

The CR-35iA robot was developed to help manufacturers solve ergonomic challenges by handling applications that are physically demanding for humans, such as heavy lifting.

“We’re very proud to have achieved this world record in robotics,” added Cicco. “Fanuc is committed to developing innovative automation products that deliver the highest levels of quality, productivity and value to our customers.”