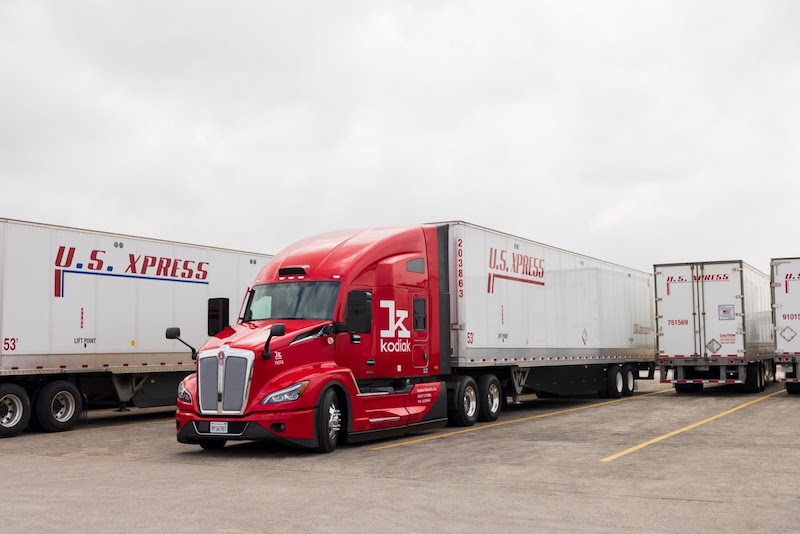 Kodiak Robotics, a developer of self-driving trucks, has teamed up with US Xpress, one of America’s largest carrier fleets, to launch Level 4 autonomous freight service between Dallas-Fort Worth and Atlanta using Kodiak’s self-driving trucks.

This strategic partnership also marks the launch of the first commercial autonomous trucking lane to the East Coast.

The truck ran 24 hours a day for 131 total hours, or nearly five-and-a-half full days. The results represent a more than 100 percent increase in utilization compared to a traditional truck and professional driver with 11 hours of service limit.

By increasing the number of hours a truck can be used per day to 20+ hours, autonomous trucks will allow carriers to haul more freight with fewer trucks, increasing revenue while decreasing costs.

As part of this partnership, a Kodiak autonomous tractor picked up and delivered US Xpress pre-loaded trailers. A rotating team of four professional Kodiak safety drivers oversaw the autonomous system.

Eric Fuller, president and CEO of US Xpress, says: “This pilot demonstrated to our operations teams and our customers the benefits that can come with autonomous technology.

“We fundamentally believe that Kodiak’s autonomous technology will allow us to scale our fleet while increasing truck utilization compared to a human-driven truck.

“Our strategic partnership is helping both of our teams identify ways to quickly integrate and scale autonomous technology into our fleet once it is commercially available.”

The route between Dallas and Atlanta is a perfect entry point for continuous autonomous operations because it’s slightly longer than what a driver is permitted to operate in a day but is too short to economically run as a team.

This pilot also represents the first-ever autonomous freight deliveries between Dallas and Atlanta.

Don Burnette, founder and CEO of Kodiak, says: “Our partnership with US Xpress marks our service expansion to the East Coast.

“We believe it is the furthest east any company has delivered multiple loads using autonomous technology.

“Having the capacity to sustain 24/7 operations across the more than 750 miles between Dallas and Atlanta — two of our nation’s busiest freight hubs — represents a giant step forward for Kodiak, and for the AV trucking industry as a whole.

“We chose to make US Xpress a cornerstone partner in our Partner Deployment Program because we see US Xpress and its Variant division as ideal long-term partners for the deployment and scaling of our autonomous long-haul solution.”

This pilot is just the first step in the partnership between US Xpress and Kodiak within Kodiak’s Partner Deployment Program.

Kodiak will continue to haul freight with US Xpress between Dallas and Atlanta, as well as other lanes within the Kodiak network.

In addition to Dallas to Atlanta, Kodiak has been delivering freight daily on the 240-mile lane from Dallas to Houston since mid-2019, and on the 280-mile lane between Dallas and San Antonio since mid-2021.

The company leverages its proprietary lightweight mapping solution to rapidly and safely add new lanes, including the recently announcedlaunch of commercial operations between Dallas and Oklahoma City in February 2022.