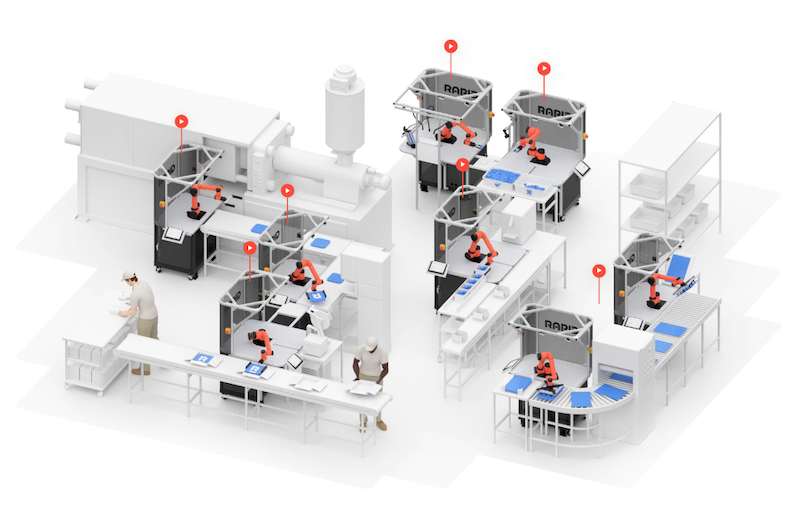 Rapid Robotics says it has developed a robot with the “fastest setup time in the industry”.

The Rapid Machine Operator (RMO) from Rapid Robotics is “the first industrial robot that can get up and running in a matter of hours”, according to the company.

It’s also the first manufacturing robot that can move between jobs “in less time than it takes to make a cup of coffee”.

Rapid Machine says the secret is Smart Setup, a “revolutionary” new capability that enables anyone to move Rapid Machine Operators onto a new job in as little as 60 seconds via built-in computer vision – no programming or robotics expertise required.

In addition to easy task-switching, Smart Setup puts an end to work stoppages caused by changes or disruptions to the work environment. Other robots need to be reset by trained specialists. With Rapid’s Smart Setup, anyone can get an RMO back in action in minutes.

The Smart Setup process is push-button simple. With one touch in Rapid Robotics’ convenient tablet-based app, the RMO’s cameras analyze the workspace. With another, the RMO calculates distances and orientations of parts and surfaces, then updates motion paths to deliver the fastest and most precise way to execute on the given task. With just one more tap, the RMO starts the new job.

“That’s all there is to it,” says Rapid. “No support tickets. No systems integrators required. Smart Setup handles everything automatically using the Rapid Machine Operator’s built-in AI, running on Rapid’s proprietary edge-computing platform.”

Tammy Barras, president of Westec Plastics, says: “Smart Setup is shaping up to be an absolute game-changer for busy high-mix environments like ours.

“We can’t pay systems integrators to come in every time we want a robot working on a different task. We’d lose more money than we’d save. With Smart Setup, we’ll be able to do everything ourselves, with practically no downtime. That means we’ll spend less, get more work done and bring in more revenue overall.”

The RMO arrives ready to work ‘out of the box,’ pre-trained to perform hundreds of common machine-tending and warehouse tasks such as pick-and-place, parts inspection, gate cutting and many more.

The RMO comes with all the hardware and software it needs to get started, including a six-axis robotic arm, computer vision system and custom grippers. Everything is pre-integrated so the RMO can get to work the day it arrives. Each RMO can be “hired” for an OpEx-friendly subscription of $2,100 a month.

Fast Company magazine recognized the Rapid Machine Operator as one of its “Next Big Things in Technology” for 2021.

“It’s so flexible, you can almost think of it as a human colleague. You can drop it into any job it’s trained for, at a moment’s notice. There’s never been anything like it on a factory floor.

“The Rapid Machine Operator with Smart Setup removes the barriers to automation, dramatically reduces cost of ownership and makes robotics available to manufacturers of all sizes, including hundreds of thousands of SMB facilities in the United States alone. It’s how we’re making manufacturers more profitable, more agile and more competitive in the global market.”

Existing customers will receive Smart Setup along with Rapid’s regular free updates to the RMO’s software and AI.