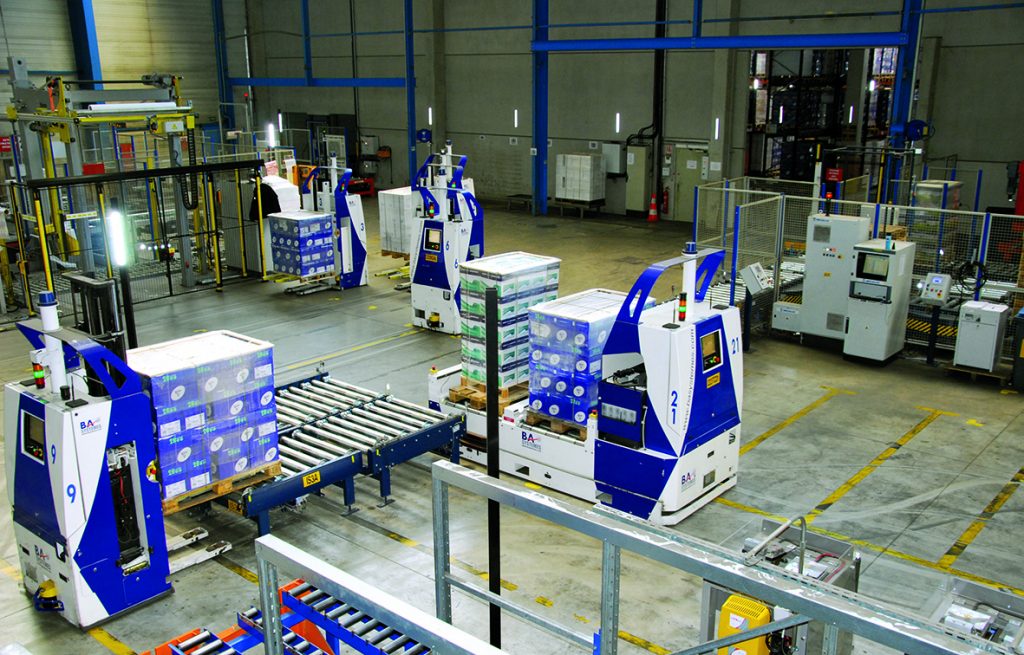 BA Systèmes is to upgrade its implementation of automated guided vehicles for its long-term client Hesbaye Frost.

Hesbaye Frost renews its confidence in BA Systèmes to replace its entire AGV installation in operation since 2000 in its site in Geer, in Belgium.

As part of the project, BA Systèmes will proceed to the equipment replacement and to the supervision software environment upgrading to achieve higher performance on this site operating in a deep-frozen environment.

Hesbaye Frost is a company in high-quality frozen vegetables, pasta and rice world market. Every year, 300 employees produce around 150,000 tons of products that are picked, frozen and packaged.

Hesbaye Frost distributes its products to its customers throughout Europe, but also in Japan, in the United States and in Israel, whether they are industries, local authorities or even large-scale retailers.

To increase the productivity of its Geer site, Hesbaye Frost wanted to renew its AGV system, which has been in operation for almost 20 years.

An AGV system for deep-freeze environments

Operating in a negative temperature of -22°, the AGVs ensure the semi-finished and finished products transfer between the different areas of the factory: end of production lines, storage, packaging and shipping area.

The new AGV fleet, composed of 10 CM2 (motorized conveyor type AGVs of new generation, which can carry simultaneously two loads of 1,400 kg) will cover the same logistic functions as before but will reach higher expected rates.

As production runs in Hesbaye Frost in three shifts and in 24/7, the declared objective was to reduce as much as possible line infeed and outfeed times and to provide a more efficient overall system in particular by saving forklift drivers to do long distances.

BA Systèmes had already developed in 2000 an intelligent energy management system to ensure the automatic change of AGV batteries while complying with the cold chain and product preservation constraints.

Indeed, a tailor-made fork stacker crane ensures the change of batteries between the refrigerated space and the positive cold space where the batteries are charged and stored.

This device ensures that the AGVs do not undergo temperature changes that could alter the normal operation of the equipment. This automatic battery changing system will be maintained and kept operational with the new AGV system after a necessary software retrofit.

A new version of AGV Manager supervision software system will also enable Hesbaye Frost to gain in flexibility and performance. For example, new functions will enable real-time analysis of the performance of the flows covered by the AGVs.

The new BA Systèmes’ AGV solution will be commissioned by the end of March 2021 during a partial shutdown planned annually for traditional maintenance operations.

BA Systèmes has been working with Hesbaye Frost since the 2000s, first in the automation and then in the maintenance of their AGV installation in Geer.

At that time, it was a very innovative and rather complex installation of about 10 AGVs associated with the control of a mobile palletizer and a WMS for the stock management of raw and packaged goods.

Over the years, BA Systèmes has been able to adapt its solution to the site and to internal processes evolutions and to make it evolve while maintaining the global performances of the system.

In addition to the reliability of the solution, these capabilities in terms of support and flexibility have convinced Hesbaye Frost to renew its confidence in BA Systèmes.

André Leclercq, investments and energy manager at Hesbaye Frost, says: “Distance will not be a problem was and remains the reassuring slogan that Hesbaye Frost wanted to see extended in terms of the quality of services that are expected.”