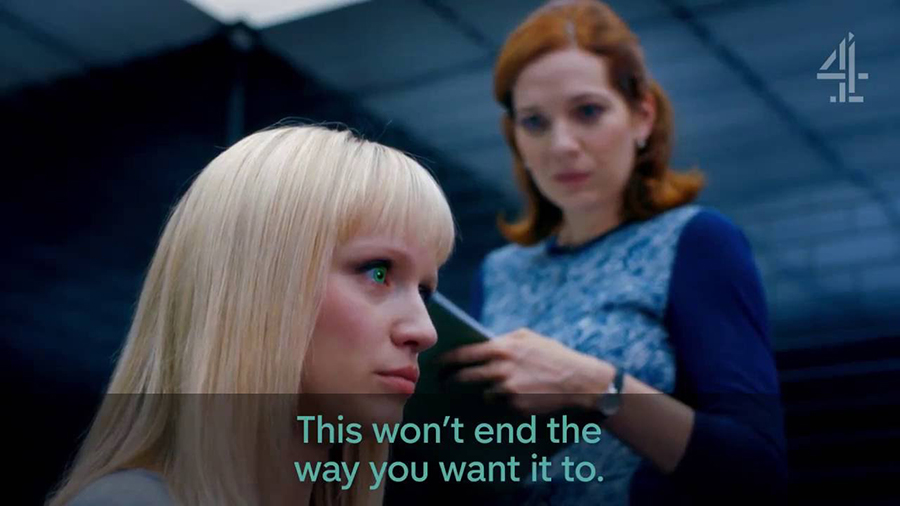 Humans is a British television drama series which first aired in the middle of 2015.

The first series had eight episodes, as did the second series a year later.

Set in the UK but in a parallel, fictional society, the series depicts a world where it’s commonplace for people to buy humanoid robots as though they were appliances – like washing machines or dishwashers – for the home.

The robots are referred to as “synths”, short for synthetic life forms. Although they look and act human in many ways, synths have no rights – they are treated as machines.

Mia was bought for domestic chores.

In other, concurrent storylines within the series, robots were bought for a variety of other purposes.

Generally, however, the robots in the series were used as domestic help.

The show attracted some big-name actors from the beginning. Oscar-winner William Hurt, for example, plays a house-bound recluse who has a robot which looks after him.

Fans of The IT Crowd comedy show will recognise Katherine Parkinson (main image, right), who plays a central role in the first series of Humans.

Carrie-Anne Moss, who played the character Trinity in The Matrix films, alongside Keanu Reeves, also played a big role in the second series of the show.

Over the two series so far, Humans has been a critical and commercial success, making the actors recognisable faces if not full celebrities.

The show has also inspired similar productions in other countries, and it could be argued that it prompted the return of big-budget franchises such as Westworld, which, as many will know, was originally a 1970s cinema movie, starring Yul Brynner among others.

Humans is now filming its third series, although reports in the media suggest this time it will have fewer than eight episodes.

It would be fair to say it’s being eagerly anticipated by its fans, many of whom say it’s one of the best shows on British TV in many years.

The underlying tension in the story of Humans is created by synths becoming “self-aware” or “conscious”.

The synths see they are being treated by humans as nothing more than machines, being kicked around, abused, physically and brutally attacked, and mistreated in innumerable ways.

Most synths are unaware that this constitutes mistreatment – or vandalism, as some might suggest – and carry on regardless.

But other synths – the main protagonists of the show – develop what could be described as feelings or an awareness that something is wrong with the way they are being treated.

With the help of some human sympathisers, these synths try and escape or fight back.

The story has moved significantly further than that, but if you haven’t seen it, it’s well worth binge-watching from the first episode in readiness for the third series when it’s out.

We’ll try not to give away too much of the story of previous episodes, and what we’ve told you so far is probably typical of many science-fiction stories of this type.

What makes Humans stand out is the terrific cast and very high production values – it’s filmed beautifully, acted intelligently, and written in a way that is informative without being didactic.

The overall feeling one gets is one of being in a discussion about what could happen in the future in the real world.

When humanoid robots in the real world become as accomplished and as useful as the ones in Humans, how will human society deal with them?

Human consciousness is often described as an inevitable byproduct of having so many brain cells which need to work together to figure things out. This is sort of related to something called “emergence”.

In a similar way, artificially intelligent robots which are required to process large numbers of disparate data sets may develop theories of their own about, for example, better ways to wash dishes or clean the house than they were taught by the programmers.

Artificial intelligence systems are said to be capable of making decisions that they were not pre-programmed to make. AI programs can recognise patterns that humans could not spot, according to some of their makers.

These are claims that are generally believed by humans because they can see some of the results – computers beating humans at chess and an even more complex game called “Go” being very high-profile examples of this.

It’s inevitable, then, that machines of the future will be more intelligent than humans in practical ways – they’ll drive cars better, build houses better, do our work better than we ever did.

And it would seem, then, that such intelligent machines will experience the emergence of something that will probably be too similar to what we call consciousness for it to be dismissed and ignored for long.

If they look human, act human, and feel pain like humans, there will inevitably be people who would argue that they should be given the equivalent of human rights.

Maybe these rights will initially be nothing more than an extension of existing laws about damage to property, or some version of animal rights laws to cover intelligent and possibly sentient machines.

But who knows what will happen in the future? We don’t.