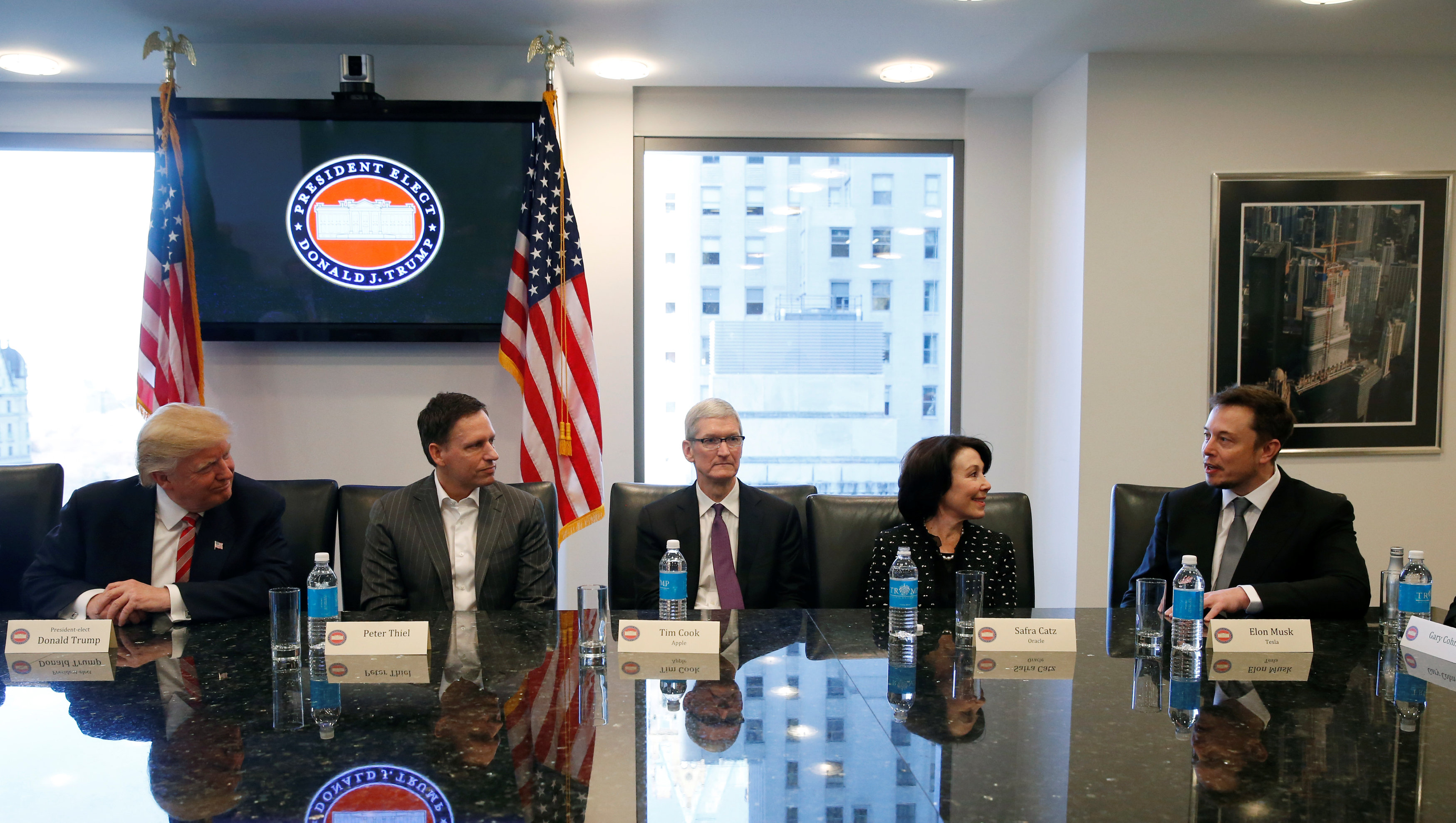 President-elect Donald Trump and some of Silicon Valley’s most powerful executives met at his Manhattan tower in the past week, at a summit convened to smooth over frictions after both sides made no secret of their disdain for each other during the election campaign.

The meeting focused chiefly on economic issues, including job creation, lowering taxes and trade dynamics with China, while largely skirting the many disagreements the tech industry has with Trump on matters ranging from immigration to digital privacy, according to a Trump transition team statement.

Trump proposed reconvening with the tech leaders as often as every quarter, the statement said.

Three of Trump’s adult children, Donald Jr, Eric and Ivanka, sat at the head of a large rectangular table as the meeting began in a conference room on the 25th floor of Trump Tower.

Their attendance may fuel further concern about potential conflicts of interests for Trump, who has said he would hand over control of his business empire to his children while he occupies the White House.

The meeting between tech luminaries, including Apple’s Tim Cook, Facebook’s Sheryl Sandberg and Tesla’s Elon Musk, took place as Trump has alarmed some US corporations with his rhetoric challenging long-established policy toward China, a main market for Silicon Valley.

A senior Chinese state planning official told the China Daily newspaper Wednesday that Beijing could impose a penalty on a US automaker for monopolistic behaviour, a warning delivered days after Trump questioned acknowledging Taiwan as part of “one China”.

The official did not identify the automaker.

“There’s nobody like the people in this room, and anything we can do to help this go along we’re going to do that for you,” Trump told the executives in the presence of reporters. “You call my people, you call me, it doesn’t make any difference. We have no formal chain of command.”

Twitter was not invited to the meeting because it was too small, a transition spokesman told Reuters.

Cook and Musk joined Trump for separate meetings after the other technology executives leave, according to a spokesman for Trump’s transition team.

Bezos said in a statement the meeting was “very productive” and that he “shared the view that the administration should make innovation one of its key pillars, which would create a huge number of jobs across the whole country, in all sectors, not just tech – agriculture, infrastructure, manufacturing – everywhere”.

Trump clashed with Silicon Valley on several issues during the election campaign, including immigration, government surveillance and encryption, and his surprise victory last month alarmed many companies that feared he might follow through on his pledges. He has said that many tech companies are overvalued by investors.

“You look at some of these tech stocks that are so, so weak as a concept and a company and they’re selling for so much money,” he told Reuters in an interview in May.

Those concerns have not been assuaged in recent weeks as Trump has threatened to upset trade relationships with China and appoint officials who favour expanded surveillance programs.

“For some of the companies, there was some hesitation about whether to attend” because of sharp political and personal differences with Trump, one tech industry source said.

More than 700 employees of technology companies pledged in an open letter on Tuesday to refuse to help Trump’s administration build a data registry to track people based on their religion or assist in mass deportations.

Alphabet’s Schmidt was photographed on election night at Clinton headquarters wearing a staff badge, and Musk said in interviews before the election that Trump’s character reflected poorly on the United States.

Despite those tensions, Trump named Musk to a business advisory council that will give private-sector input to Trump after he takes office on January 20. The CEOs of Airbnb and Uber were invited but did not attend Wednesday’s gathering. Uber’s Travis Kalanick, travelling in India all week according to a person familiar with his plans, was also appointed to the council.

Trump publicly bashed the industry during the campaign. He urged his supporters to boycott Apple products over the company’s refusal to help the FBI unlock an iPhone associated with last year’s San Bernardino, California, shootings, threatened antitrust action against Amazon and demanded that tech companies build their products in the United States.

Trump has also been an opponent of the Obama administration’s “net neutrality” rules barring internet service providers from obstructing or slowing consumer access to web content. Two advisers to his Federal Communications Commission transition team are opponents of the rules, as are the two Republicans on the FCC.

Last week, the two Republicans on the panel urged a quick reversal of many Obama policies and one, Commissioner Ajit Pai, said he believed that net neutrality’s “days are numbered”.