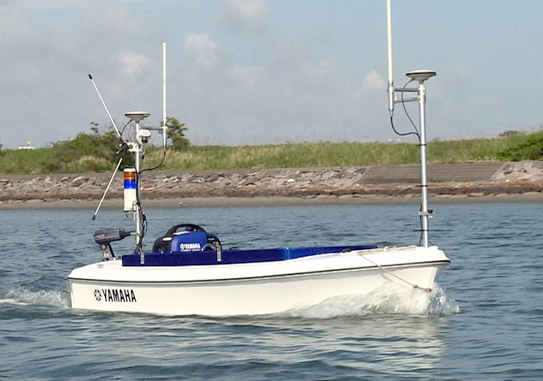 The company designed the new product to support sounding work such as measuring the sediment levels of dams, and will commence business rentals principally aimed at commercial surveyors in August 2016.

The Breeze 10 uses GNSS (a satellite positioning system) positioning data and azimuth angle data, which allows unmanned autonomous navigation and supports improvements in efficiency and labor-saving efforts for surveying the beds of bodies of water using sonar, and so on.

In addition, usage of the craft is expected to expand from the surveying field into surveillance and defense support in the future, says Yamaha.

Dams have a variety of roles including irrigation, flood prevention, and power generation. In modern Japan, they are owned and managed by the Ministry of Land, Infrastructure, Transport and Tourism, prefectural governments, power companies, and other entities.

The silt which builds up at the bottom of a dam must be removed via periodic dredging to prevent it from affecting the dam’s fundamental water collecting functions. Ascertaining information regarding the silt conditions on the dam bed prior to dredging is essential.

Many silt surveys are currently performed from the water surface with all-purpose small-capacity manned craft equipped with sonar.

However, this presents a variety of issues, including the accuracy of navigation routes and the half day required for mounting and adjusting the measurement equipment.

Furthermore, surveying work is often performed in winter, when there is little rainfall, and the work becomes very taxing on workers performing surveys at dams in mountain regions in frigid temperatures.

The new Breeze 10 was planned and developed as a solution to these problems. Thanks to measurement equipment that can be mounted on land quickly as well as programmed auto-navigation, the Breeze 10 makes work more efficient and saves labor.

In addition, as well as featuring the mounting of narrow beam sonar, the ability to carry one occupant, and having a long operating time, its compact design means that it can even be transported in some minivans.

Furthermore, operating the Breeze 10 together with Yamaha Motor industrial-use unmanned helicopters provides the possibility of comprehensive surveys of the surrounding topography, an approach that leads to more effective application of dam resources.