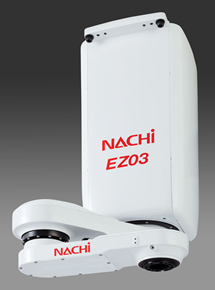 Nachi-Fujikoshi has launched what it says is a new category robot, called Wing Slicer, of the type EZ series.

The company says the new machine represents an expansion of the compact robot market.

Efforts to automate have been increasing with the objectives of improving productivity, reducing costs, and improving quality through the introduction of compact robots for automotive and industrial machinery applications.

Compact robots benefit electrical and electronics fields and light industries such as chemicals and food at both domestic and overseas manufacturing sites as well.

In developing nations, including China, the automation of manual work and the demand for replacing human labor with compact robots have been expanding rapidly against a backdrop of skyrocketing labor costs and a declining workforce.

In September 2013, we introduced the world’s fastest lightweight, compact robots, the MZ series to the market. In 2014, we made further efforts to cultivate the compact robot market around the world by extending our product range.

Today, there is an increasing need for automation especially in electrical and electronic manufacturing where large EMS (Electronics Manufacturing Services) players are driving such movement.

Nachi-Fujikoshi says: “In view of such demand, we are introducing a new category Robot EZ series Wing Slicer type. We are now able to provide even more flexible manufacturing system solution to the market by combining it with our existing MZ series.

Nachi says the EZ series Wing Slicer type robot has unique features, such as the ability to move its entire arm up and down. It also has the following features: space saving, high speed operation and minimizing inaccessible area.

Nachi says thanks to its slim arm which has no servo-motor inside, high speed operation is possible. Inverted mounting allows no inaccessible area and it can generate the shortest path under the robot body, thereby reducing the operating distance.

The net result is reduced cycle time by 30 per cent (compared to a floor mount type SCARA).

The new robot also has smart cable routing. Wire and tube routing to hands, and so on, is made easy by the hollow wrist with a large, 36 mm-diameter hole in the tip of the wrist.

With all wires and tubes built into the machine body, the risk of interference with peripheral devices is reduced, hence operational reliability is significantly improved.

More complicated operations such as insertion from an angle, change of orientation in an assembly process and grinding/finishing processes were considered very difficult with traditional “horizontal articulated” types.

With the addition of EZ02 having 6-axis arm, such operations are possible.

Various options of Wing Slicer robot depend on the requirement of equipment. Users can select a combination of appropriate arm length and controller from four lineups.