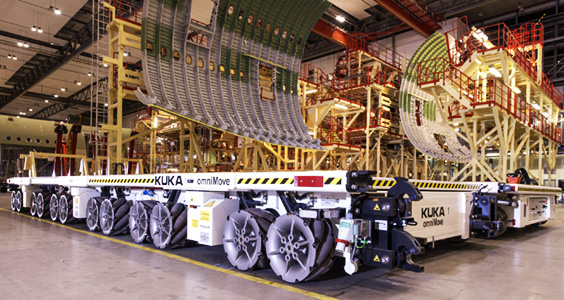 With their Mecanum wheels, they are able to transport aircraft components weighing up to 90 tonnes with “millimeter precision” in confined spaces, claims Kuka.

It’s all about the Mecanum wheels, apparently

Kuka says it’s the Mecanum wheels on the omniMove which enable “maximum maneuverability”. Mecanum wheels are designed to allow movement in any direction.

Construction of the Airbus A380 in Hamburg involves moving aircraft components measuring 15 meters in length and weighing up to 90 tonnes.

This is made possible by the Kuka omniMove mobile transport platform, a transport vehicle for heavy loads that is equipped with omnidirectional Mecanum wheels, says Kuka.

The Mecanum wheel design ensures unrestricted manoeuverability without the need to steer the wheels, says Kuka.

For a year now, Airbus has been using two of these vehicles in the hangar in which the A380 is produced. This enables implementation of the desired cycle time for transportation of the fuselage sections and the parts are moved along the production line, claims Kuka.

Due to the different work stations and the huge fuselage sections, space in the Airbus hangar is limited. The ability to turn from a standing start is the greatest advantage of the Kuka omniMove. The Mecanum wheels move in every direction and operate with the utmost precision even with a maximum payload of up to 90 tonnes.

Dr Kai Brüggemann, Airbus plant manager in Hamburg, says: “Our success is unequivocally based on innovation and we also implement state-of-the-art technologies in our production facility.”

The Kuka omniMove meets these requirements very well. It is easy to operate, quick to learn and particularly easy to steer. Furthermore, the batteries are very powerful: the transport platform operates tirelessly for 48 hours without the need to recharge them.

The ease of handling, flexibility and precision of the Kuka omniMove have “greatly impressed” the team at Airbus that operates the platforms, claims Kuka.

Dr Brüggemann adds: “The omniMove has always been the optimal solution for handling and transportation of the A380. I hope to be able to introduce further Kuka products to our hangars.”