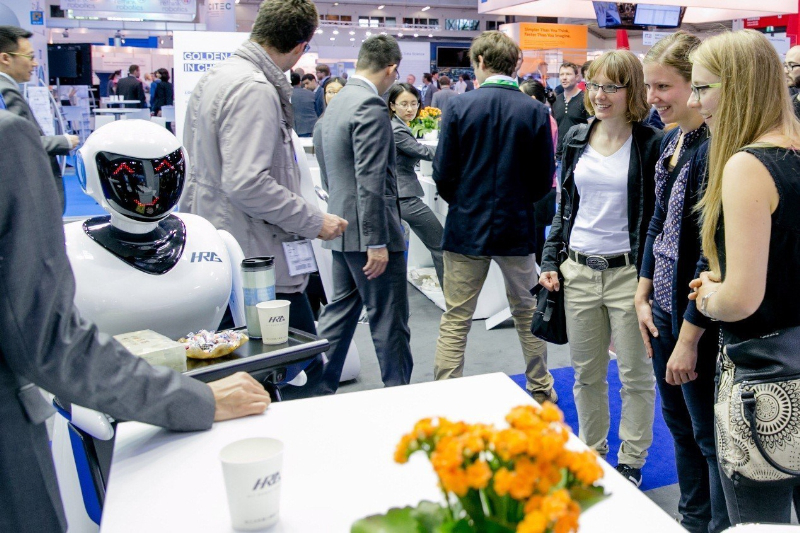 During the four-day fair, HRG displayed its latest technologies and products, hoping to strike a chord with foreign companies keen on exploring the Chinese market.

“We believe that a partnership with HRG will put the foreign partners on a fast track to enter and tap the Chinese market.”

China aims to establish a complete industry chain for intelligent manufacturing as the central government pledges to turn the country into a global powerhouse in innovation. Wang says HRG could offer more foreign companies a gateway to success in China.

The trade show in Germany, held every two years, focuses on the latest technologies in industrial control and automation. HRG’s booth at the show has two themes: “robotics products to offer a wide range of services”, and “solutions for intelligent manufacturing”.

At the four-day industrial fair, HRG hopes to find partners that have plans to enter China’s robot market and secure clients which intend to conduct intelligent manufacturing as they expand in the world’s second-largest economy.

HRG made the headlines in December 2015 when it formed a tie-up with Switzerland-based medical technology company Hocoma to produce rehabilitation robots in China, offering the best and most affordable rehabilitation services for local patients. Other existing overseas partners with HRG include ABB and Kuka.

“We hope the global leading players will better understand that HRG is their golden partner in the Chinese market,” says Wang. “We are also looking for right partners to combine our efforts to explore the huge potential of the market.”

HRG and its strategic partners also manage more than RMB5 billion of investment funds slated for the robotics industry.

For HRG, the trade show not only creates a platform to exchange information with foreign exhibitors and visitors, but also an opportunity to learn potential impact from the Industry 4.0, which will eventually inspire HRG to better develop its new products to pioneer a new round of innovations in China’s robotics industry.