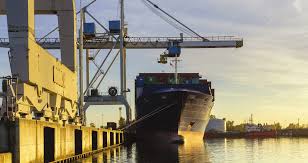 Measuring over 100m wide and over 60m high and with a lifting capacity of 45t, the port crane used for loading and unloading containers is one of the many items of equipment that have been modernised during the current year by Apator Control engineers.

The crane at the DB Port Szczecin container terminal has undergone a thorough electrical and mechanical refit.

The bridge travel, trolley travel and spreader lift were given new drives, while the remaining electrical systems were integrated for operation through the PLC.

The bridge travel’s eight 22 kW motors are powered and controlled by the Unidrive M600 frequency converter, which has a rated current of 377 A. New cabinets with trolley drives and hydraulic spreader lift controls have been installed in the machinery room at the top of the crane.

Following the refit, the Mentor MP DC drive, which has a rated current of 210 A, is responsible for powering and moving the trolley that transports containers from ship to shore.

The lift’s two motors are powered by Mentor MP drives each with a rated current of 350 A. They lift a hydraulic container spreader suspended on four lines.

To ensure that the lifts work in sync, absolute encoders have been built into their motors and connected to the PLC. The signal from the controller is transferred to the lifts’ drives, which ensures they operate simultaneously and actuates the hydraulic spreader’s auto-levelling function.

It is essential for the spreader to be positioned horizontally in respect of the container so that it can be properly seized and secured. The container can move upwards only after the entire procedure has been performed and the system has confirmed that secure contact has been made.

The use of absolute encoders has made control of the spreader’s position more precise. The operator is thus able to set it exactly in parallel – even if containers are leaning due to uneven load distribution during unloading. This has resulted in reducing ship loading and unloading times.

The festoon suspension has been upgraded. The power cables have been replaced, while the signal cables have been replaced by the system of communications between distributed inputs and outputs using the Profinet network, which has made it possible to reduce the number of signals in the festoon suspension by more than 50 per cent. The Profinet network has been constructed using flexible optical fibre, which is well suited to installations using this type of equipment.

Apator Control has built three visual-monitoring stations on the crane: in the operator’s cabin, in the machinery room and at the base. The overall crane control system has also been modernised with the addition of radio control.

The refit has streamlined the container transporting process. The solution described above was made possible thanks to the versatility of the Control Techniques drives, which Apator Control has been using for fifteen years in its own applications.

In many cases precision control and the option to add extra modules are indispensable features. This is exactly why these adaptable drives can be successfully used in different types of machinery. They exemplify the most advanced technology – as has been proven by the successful application of Unidrive M.