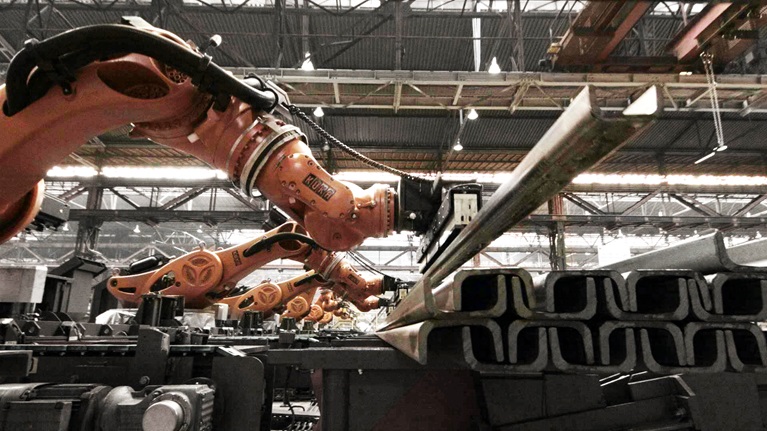 Used in the automotive industry and port construction, for example, the steel profiles can weigh up to 2.5 tonnes at a length of up to 26 meters.

Such unusually huge scale was the first challenge that had to be met by Kuka in implementing the solution. The handling of very heavy steel beams was previously not possible for robots, says Kuka.

Six Kuka KR 1000 titan robots are now installed at Mannstaedt. Following delivery by conveyor, the special profiles are stacked by the robots in a space-saving manner. The stacks are then conveyed out of the robot station for shipment to the customers.

The decisive advantage of the changeover to the new Kuka system is that Mannstaedt can now produce even larger products, confident that the robots can handle them.

Kuka says its robotic automation solution enables Mannstaedt to produce special profiles with a length of up to 26 meters – instead of the prior maximum of 16 meters.

Six KR 1000 titan robots make this possible. The heavy-duty robots offer not only a very high payload capacity but also high repeatability even over greater distances.

Marcus Haas, plant manager at Mannstaedt, says: “The system is an absolute success. With simplified methods, we have made production easier and more flexible.”

The changeover has enabled Mannstaedt also to significantly increase the flexibility of production, which is reflected directly in an enlarged range of products. The success has prompted Mannstaedt to initiate new automation projects in the downstream production process.