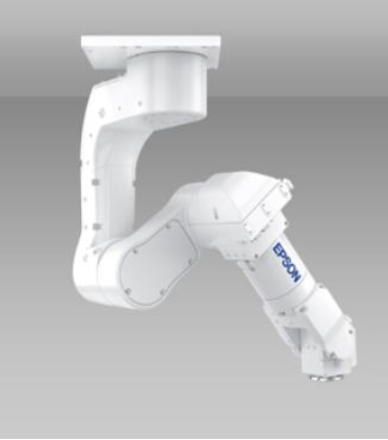 Epson has developed a new series 6-axis robot for use in compact applications with high demands on the precision of movements.

The company says the “special geometry” with foldable arm allows a range of up to 450 mm and in restricted space. Typical limitations of conventional six-axis as a high space requirement for overhead rides omitted.

Thus, the N-series is considerably more flexible and efficient in industrial applications of automotive, electronic, medical and Labortindustrie. The first variant of the Epson N-robot has a payload of up to 2.5 kg.

The new machines will be on display at the Epson booth at Automatica (Munich, booth B5.319) late June.

Increasing labor costs and increasingly high demands on the precision of production have to push up the demand for precise and fast robot systems significantly.

Especially producers of smaller assemblies often looking plants, which are extremely tough, despite a high throughput in their footprint. The new Epson N Series allows both.

Thus, the arm 600 mm despite its range of up to 450 mm in a range of, for example, only 600 x installable while completely mobile.

The foldable arm ensures that the machine does not collide with other tools the workcell. The cycle time is again shorter than in conventional geometries due to the favorable weight distribution and particularly short runways.

In addition, the calibration and setup of the machine is very simple. The N-series is ideal for use in production and quality assurance in the automotive, electronics, medical and laboratory equipment, and will be available in different configurations later.

“Epson has set itself the task of simplifying the production of products by high-performance robots such as the N-series and to make more efficient,” explains Volker Spanier, head of factory automation of Epson Germany.

“With new, unique products, we meet with our solutions worldwide customer expectations and support them to be particularly competitive. At Automatica 2016 in Munich we will present the new robot at our booth B5.319.”