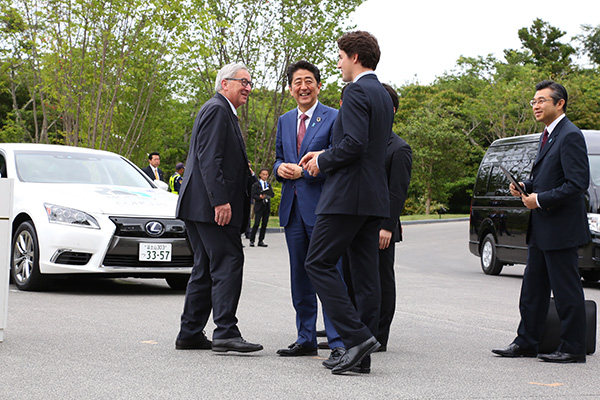 The G7 Summit was held last week in Ise-Shima, Japan, and local carmakers Toyota, Honda and Nissan took the opportunity to unveil some new innovations in their autonomous product range.

Prime Minsiter Abe presented the cars at what was called a “side event” at the summit, and leaders took test rides in the vehicles.

According to an official statement explaining Abe’s comments, the Japanese prime minister is said to have told the G7 leaders that “the commercialization of automated-driving vehicles will serve to reduce traffic accidents and ensure a transportation means for the elderly and others that is safe and offers a peace of mind”.

Abe added that “Japan will aim to achieve the safest road traffic society in the world in the run-up to the 2020 Tokyo Olympic and Paralympic Games”.

Abe also said that “Japan is promoting the wider use of fuel-cell vehicles that utilize hydrogen energy and will lead the world in working to resolve environmental and energy problems”.