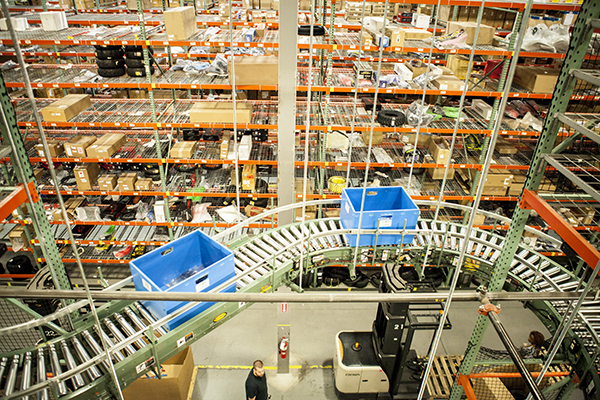 Park City, Utah-based Backcountry.com is a great example of the powerful growth in the online e-tailing sector. Twenty years ago the company comprised of two men, a stack of avalanche beacons, and a garage in Park City; the company has grown to become one of the leading online specialty retailers in the United States, selling clothing and outdoor gear for hiking, camping, road biking, mountain hiking, rock and ice climbing, mountaineering, skiing, avalanche safety, snowboarding, fly fishing, kayaking, rafting, road and trail running, and more.

Jeff Carter, senior vice president of global fulfillment, at Backcountry.com, says: “Our mission is to connect people to their passions and enable them to get outdoors and enjoy the gear.”

From Excel to mass handling

When Carter came on board, Backcountry.com was doing its distribution through Excel spreadsheets. Before the company opened up a distribution center in Salt Lake City, Carter was tasked with building a warehouse management system (WMS) in open source that subsequently was named Interchange. It was the first major step towards the modern distribution system currently employed by the company.

Carter says: “Around the time we started building the WMS, I began working with Mark Westover at Hoj Engineering and Sales (a leading systems integrator and integration partner of Hytrol Conveyors) on the racking and conveyor system to make sure the two were compatible and complementary. That’s a critical piece that a lot of companies miss. If the WMS is not compatible with the material handling system, it can create flow issues, especially on large volume days during peak season.”

As with many fast growing e-commerce, online retailers, Carter started thinking about the difference between direct to consumer distribution and distribution to a traditional retail network. The WMS and material handling system came together at Backcountry.com’s 325,000-square-foot distribution center in Salt Lake City, established in 2005. The first system we installed for them was a pick and pass system noted Westover, who is now automation omni-channel distribution and fulfillment specialist with Hoj.

The biggest challenge to that system was scalability; when the project started, Backcountry.com had only a small number of SKUs; but today they have more than 500,000 SKUs, with 350,000 on hand at any one time.

The initial pick and pass system worked well, but once the company surpassed 200,000 SKUs, it started bogging down a bit. Corrective automation actions were taken such as implementing things like early out; instead of making an order go through every zone, it could be taken out of the system and routed to packing.

The system developed for the first distribution center (DC) was very complex, with all the features to make pick and pass scale through half a million SKUs and the e-tailer learned a lot in adapting the system over the years to accommodate growth, internally on the WMS and with Hoj on the racking and space utilization front. This experience would prove invaluable as Backcountry.com moved forward in designing a new more robust automation solution.

The company’s growth led to the decision to open a second distribution center in Christiansburg, VA, to handle the East Coast of the United States. The company negotiated and found a location to build a 300,000-square-foot facility, with the potential to expand to 400,000 square feet. Hoj returned with an original racking and flow system using vertical lifts instead of diverts; this automated process ensured the routing was from pick to pick, rather than picking and passing through zones. Totes go from each pick to the next pick to the next, using a “three-dimensional” process.

The Virginia facility went live in 2012 without congestion and is now handling 54 percent of the company business. Multiple item orders are working faster and are easier to process in Virginia because of the three-dimensional direct-to-zone pick design. Orders in Virginia are processed and completed 20 percent faster than in Utah. The new facility is 20 percent more efficient on a cost-per-order basis.

To watch a video of how Hoj Engineering worked with Backcountry.com: