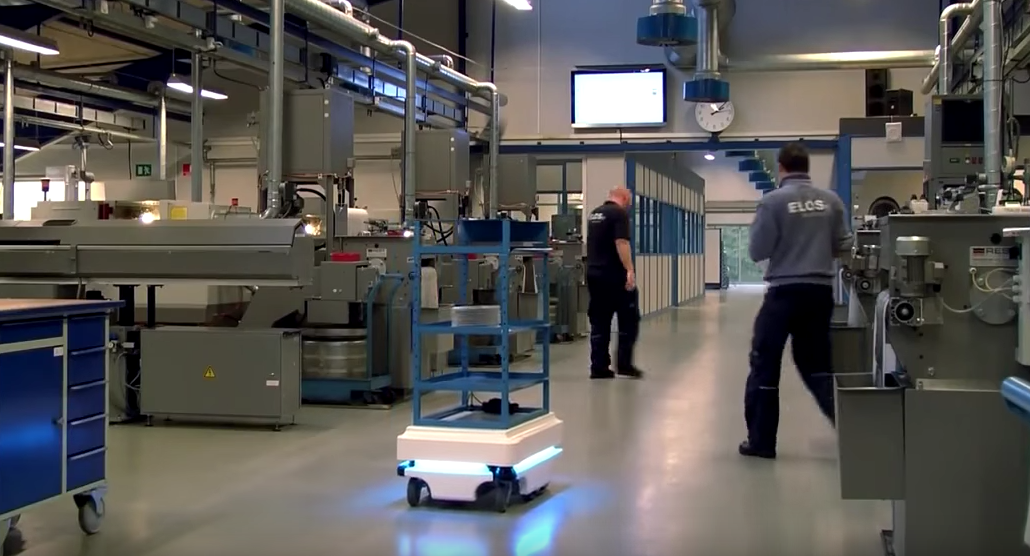 Mobile Industrial Robots, MiR, has opened its first US office and is launching its autonomous mobile robot – the MiR100 – in the North American market.

MiR says its robots are already in use in 19 countries at prominent manufacturers such as Leoni, Flextronics, and Continental.

MiR says its products are at the forefront of a new generation of autonomous mobile robots whose ease of use, flexibility and payback of less than a year. The company believes it will secure a leadership role in North America.

The emerging mobile robot industry is expected to achieve total sales of 14,500 units and revenue of $20 billion over the next three years according to the International Federation of Robotics.

The company says its MiR100’s ease of use, flexibility and repayment period sets it apart from other transport logistics solutions on the market.

Traditionally, logistics robots demanded that the surroundings be remodeled to accommodate in-floor tracking systems for the robots. But, MiR100 is designed to be highly adaptable, finding its way around obstacles and changes in the environment.

It will revolutionize how companies move items throughout facilities, says MiR. And, its attractive price point of less than $30k, combined with an open, customizable technology platform and intuitive interface, will make MiR100 a perfect complement to the innovative solutions being put in place by North American industrial automation distributors.

MiR100 is the most advanced autonomous mobile robot for small-task indoor transportation of items in the manufacturing and healthcare markets.

Programming and operation happen through an intuitive interface accessible via a smartphone and tablet app (iOS and Android) or PC application in just a few hours without additional implementation costs. The robot can either “identify” its drive area and surroundings or import 3D drawings of the building layout.

Built-in sensors and cameras enable the MiR to be used for safe collaborative operation in an environment with people as it automatically stops and routes around obstacles. MiR100 has a carrying capacity of 220 pounds and can tow approximately 660 pounds. Various custom module solutions can be added.

He began his career at Micron as a designer, but quickly moved to sales because of his love for identifying solutions for customer problems. His success won him the opportunity to direct sales for Universal Robots when it entered the North American market in Fall 2012.

Mullen took that Danish company from a position of being relatively unknown in North America to becoming today’s market leader of collaborative robotics. MiR looks forward to tapping into Mullen’s ability to drive new markets and create a leadership position for MiR in North America within the autonomous mobile market.

Mullen says: “I am thrilled to have the opportunity to once again launch an amazing product here in North America. Over the last five years, the world has had a chance to see what a true technology hub Denmark is with the success of Universal Robots.

“I believe that MiR, with the technology they have developed, has the potential of creating a similar success story.”