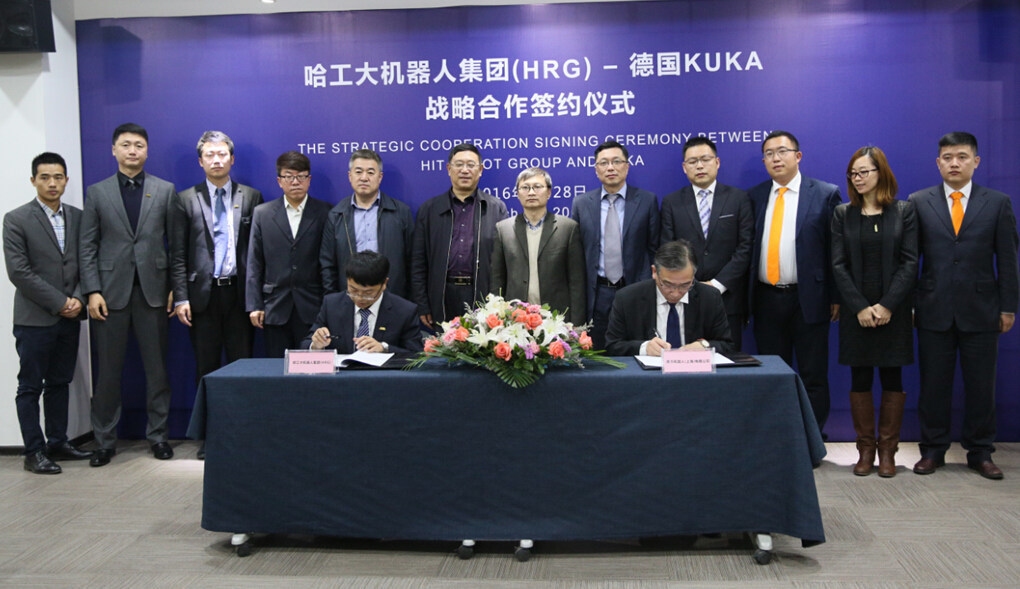 Chinese company HIT Robot Group (HRG) has signed an agreement with Kuka Robotics (Shanghai) to work on a range of projects on the applications of industrial robots in intelligent manufacturing and Industry 4.0.

By exploiting the advantages of both sides, the two companies say they will try to extend the applications of industrial robotics in different fields.

Kuka is one of the world’s largest robot manufacturing companies. HRG has the support and resources from the Harbin Institute of Technology (HIT), China’s top robotics institution.

Wang Yang, VP of HRG, says: “Kuka robots are famed for precision and control technologies; while the advantage of HRG is in secondary platform development, especially in the application of advanced parameters.

“We are devoted to further developing the open type platform which is based on the youBot for the application of robotic products, and we are doing a great job here. This cooperation between the two giants will boost the expansion of the robot market for HRG.”

As part of the cooperation agreement, HRG will team up with Kuka to develop applications for intelligent factories and logistics facilities. In addition, the pair will jointly carry out education projects in vocational colleges and universities, including introducing advanced teaching modes from Germany and setting up new programs for robotics majors.

China is now the largest market for robots, and the robotics industry in the country has enjoyed rapid development in recent years. However, the industry still faces a shortage of professional talent in manufacturing and innovation. HRG fills in the gap with its background in industrial robots and focus on robotics education.

The department has developed a range of robotic products that are applicable in industries and improved for education purposes. These products are used in vocational colleges, universities and R&D institutions. So far, the company has produced a series of robots that work in supermarkets or intelligent factories, and trained robots for other companies including Kuka youBot, LBR iiwa, ABB YuMi and Rethink Robotics Baxter.

HRG also entered an agreement with ABB Group in January to carry out cooperative projects in industrial robots and robotics education.