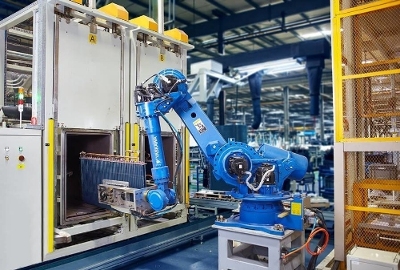 Chinese company Midea, which makes consumer appliances, has launched a bid to buy all of Kuka, the industrial robot manufacturer from Germany. It already owns around 14 per cent.

Midea floated the proposal through its affiliate, Mecca International. The deal on the table is for all shares in Kuka at €115 per share.

The decision confirms Midea’s previously stated intention to increase its shareholding in Kuka. Currently, Midea indirectly owns 13.5 percent of Kuka’s shares. In line with the applicable regulatory framework, the increase of the shareholding to more than 30 percent requires an offer for all issued shares in Kuka.

In a statement, Midea says it is committed to maintaining Kuka’s independence as a publicly listed company in Germany and has no intention of entering into a domination agreement regardless of the result of the takeover offer.

The all-cash proposal provides Kuka’s shareholders with “compelling and immediate value”, says Midea, as it represents a 59.6 percent premium over Kuka’s unaffected closing price of €72.05 on February 3, 2016, the day before the publication of Midea’s 10.2 percent stake.

The completion of the takeover offer will be subject to certain conditions. These include, in particular, achieving a minimum acceptance threshold of 30 percent of the issued shares of Kuka, including the shares already owned by Midea, necessary antitrust and other regulatory clearances and approval of the transaction by the shareholders’ general meeting of Midea.

Paul Fang, chairman and CEO of Midea, says: “As a customer and investor, we have been impressed by Kuka’s management and employees and have had constructive dialogue since building our initial stake in the company.

“Kuka is in excellent condition today and we are committed to investing in Kuka’s employees, brand, intellectual property and facilities to further support the company’s development.

“We would like to have a meaningful stake in Kuka above 30 percent and have no intention of concluding a domination agreement or delisting the company.

“We believe that a larger shareholding strikes the right balance between an independent Kuka while also putting both companies in a position to drive further growth through collaboration, especially in China. The investment fits perfectly into Midea’s Smart² strategy, which aims to upgrade our manufacturing competencies and develop smart home devices.”

Midea says there is mutual strategic benefit through complementary businesses and joint development of robotics for applications in general industry and logistics as well as service robotics.

One of Kuka’s stated key strategic focus areas is the broader robotics market in China, an area in which Midea also sees substantial growth opportunities driven by rising labour costs and an ageing Chinese population. Kuka stated that by 2020, it plans to grow sales to €1 billion in China from €425 million in its most recent financial year.

As a leading industrial company in consumer products, Midea has an extensive network of distributors, suppliers and other constituents and is therefore an ideal partner to significantly strengthen Kuka’s positioning, address local customer needs and increase its exposure to general industries in China, which has the largest and most diverse general industries sector in the world.

Based on its manufacturing capabilities, Midea will seek opportunities to support Kuka to fully utilize its capabilities and network and realise efficiencies in its supply chain.

Having serviced households both inside and outside of China for decades, Midea sees substantial potential, specifically in smart home appliances. In 2015, Midea launched its Smart² strategy, to further upgrade Midea’s manufacturing and logistics automation via additional investments in robotics, and to look into developing smart home devices based on robotics technology. Midea’s goal is to raise its overall sales over the coming years to over €25 billion, of which smart devices and service robotics will form a significant portion.

Andy Gu, vice president of Midea, says: “Midea sees Kuka as its partner of choice in further enhancing its automation product and service offerings, while Midea makes an ideal partner for Kuka to develop, manufacture and market Kuka’s robotics proposition. We look forward to leveraging our experience and additional financial resources to accelerate Kuka’s strategy in China and support their expansion into general industries.”

Midea also aims to enhance its manufacturing efficiency through Kuka’s technology throughout its industrial base and supply chain, while Kuka can capitalize on Midea’s manufacturing expertise.

Midea says there is a strong strategic rationale in an increased collaboration between Kuka’s Swisslog business and Midea’s broad logistics operations to drive warehouse and logistics automation in the growing Chinese logistics market.

Midea reiterated that it values Kuka’s independence and proposes corresponding commitments. Midea fully supports the operational independence of Kuka’s business, says the company. Midea regards the continued leadership of the current management team as “critical” to Kuka’s continued success and is “fully supportive” of Kuka’s current strategy, employment base and brand development.

Midea’s Fang, says: “We intend to seek representation on the Supervisory Board in a manner which appropriately reflects our shareholding and look forward to working constructively with the other Kuka board members and shareholders to support the company’s future development.

“We are prepared to agree to specific commitments in this regard. We expect these to include continued support for Kuka’s employment levels, brands and intellectual property. Moreover, we will look to support Kuka’s additional investments in Research and Development and software to maintain its competitive advantage.”