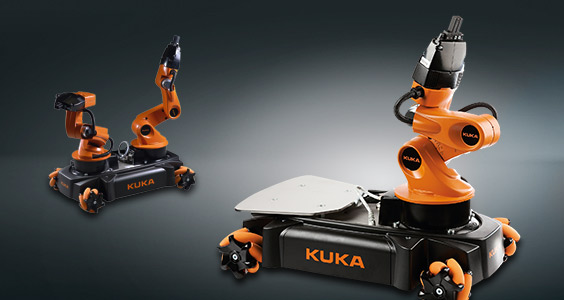 Kuka says it will be presenting “three innovative corporate research projects” at one of the world’s largest robotics conferences.

The International Conference on Robotics and Automation (ICRA) in Stockholm offers researchers from across the globe a platform to present innovative solutions. Kuka is a sponsor of ICRA.

Dr Rainer Bischoff, head of Kuka corporate research, says: “At ICRA, we will not only be showcasing our latest technological developments, but we will also be taking a broader view to discuss new scientific approaches for developing innovative ideas in the future as well.”

Stefan Lampa, CEO of Kuka Robotics, adds: “Innovations are the driving force for the growth of a company. They strengthen the product portfolio and help to open up new markets.”

KUKA innovations and projects at ICRA 2016

In Project Areus, Kuka and its partners are developing technologies for the energy-efficient operation of robots. Using a Kuka KR Agilus robot as an example, the project partner Chalmers University of Technology will present a new kind of energy-efficient path planning, which, depending on the task, can achieve energy savings of up to 30 per cent.

The all-important peak consumption of energy can even be reduced by up to 60 per cent. This will be demonstrated to visitors by the robot executing a path firstly with conventional planning and then with the energy-optimized method.

A laser pointer will be used to visualize that the optimization does not alter the geometry of the path.

A further special feature of the application is the use of the innovative Kuka Sunrise control software.

Currently, the software is not integrated as standard in the Agilus. However, the application offers an exciting look into the optimization potential in this area of Kuka industrial robotics.

A smart LBR iiwa lightweight robot demonstrates machine learning by using an algorithm to classify and sort various objects. The sample objects are shown to the system in a training phase. Attributes such as size and color are captured via a 3D camera and the robot receives instructions from an operator on how the objects are to be sorted – namely, to the left or to the right.

A mere ten exercises are necessary for the robot to learn the criteria. Following this, the program can then even automatically assign new and unknown objects. If something should ever go wrong, the operator can correct the error. In other words, the robot learns continuously, adapting to changes and constantly improving. This provides an opportunity for the topic of intelligent robotics to be discussed with experts from all over Europe.

Additionally, the youBot in a box concept study shows that robot education, training and research can be performed easily and safely from one’s desk – without losing sight of industrial uses. The youBot in a box is a five-axis robot arm with a two-finger gripper and is connected to a computer via an Ethernet cable.

This computer runs Kuka Sunrise OS software, which is used to control the robot. The youBot can be programmed in Java via Kuka Sunrise.Workbench. Since this programming environment is also used for large Kuka industrial robots, the youBot in a box is the best and quickest way for students, researchers and end users to enter the world of Kuka robotics.