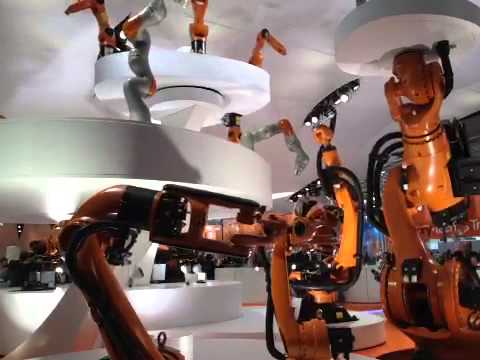 LBR iiwa lightweight robots did a dance at the Hannover Messe opening ceremony on Sunday 24 April.

In front of almost 3,000 guests including Chancellor Angela Merkel and US President Barack Obama, dancers and Kuka LBR iiw robots turned human-robot-collaboration into a staged performance.

Human-robot collaboration is a central topic for the factory of the future.

The grand opening of Hannover Messe 2016 on Sunday was based entirely on the topic of Integrated Industry – Discover Solutions.

“Humans and robots become colleagues during the performance,” says Kuka in a statement. “They work hand in hand and complement each other with their respective assets. A harmonious dance between the robots and humans will convey this partnership to the guests. In terms of agility, the LBR iiwa is on a par with its dancing partners, thanks to its seven axes.”
Surrounded by a curved, LED-based stage backdrop, the KUKA robots and their human dancing partners will find themselves in an imposing, digital setting. This application is the product of a cooperative project with IBG, XPIONand Deutsche Messe AG.
An impressive start to the world`s most important industrial trade fair. From Monday onwards, visitors can experience the LBR iiwa and Kuka’s solutions for the factories of the future up close at the Kuka booth in Hall 17.