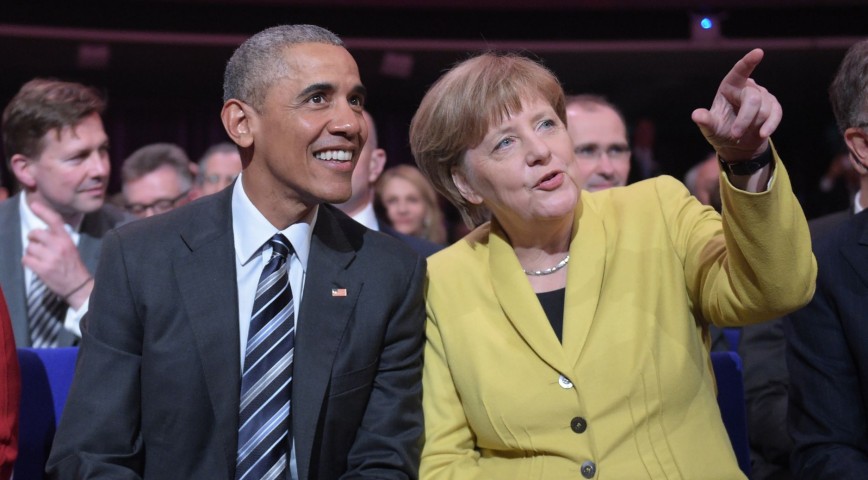 The curtains have gone up at Hannover Messe 2016, where leading industrial nations are vying for technological supremacy.

For example, 465 exhibitors from the USA are presenting innovations designed to take manufacturing to new digital heights.

They are sharing the arena with a host of German enterprises intent on making Industrie 4.0 a reality by means of cutting-edge mechanical and electrical engineering solutions.

So who’s going to come out on top? Or will the road ahead instead call for close collaboration?

“Industrie 4.0” and “Industrial Internet”  are two concepts that US President Barack Obama and German Chancellor Angela Merkel likely heard a lot about when visiting selected exhibitors on their opening-day walkabout of Hannover Messe, the world’s leading trade fair for industrial technology.

Which of the two terms comes up will depend largely on whether the touring heads of state are vis-à-vis with a German firm or an American one. The reason: Although closely interrelated, the two concepts embody rather different approaches to integrated industry.

“Hannover Messe will bring together the best of both worlds,” says Dr Jochen Köckler as the member of the Deutsche Messe Managing Board in charge of Hannover Messe.

“German industry will be climbing into the ring with their world-famous engineering prowess, while their U.S. counterparts will be flexing their muscles as creators of novel data-based business models. It will be a case of ‘Industrie 4.0 meets the Industrial Internet’. And Hannover Messe 2016 will reveal the potential for common ground between the two approaches.”

The second keynote theme at this year’s Hannover Messe is intelligent energy systems.

Köckler says: “Digitalization is the way forward for the energy sector, just as it is for manufacturing. The smart technologies and solutions needed to make it all happen will be on show here in Hannover.”

When the gates open on Hannover Messe 2016 (on Monday, 25 April), visiting professionals responding to the rallying call “Integrated Industry – Discover Solutions” will be treated to a highly international lineup of over 5,200 exhibitors – even more than at the most recent staging of Hannover Messe of comparable scope (2014), when approximately 4,800 exhibitors took part.

As much as 58 percent of this year’s exhibitors are from abroad, with 75 nations represented in all. The top exhibiting nations are Germany, China, the USA (this year’s Partner Country), Italy, Turkey, and the Netherlands. China, alone, is expected to field some 650 exhibitors. Next in the ranking is the USA, with 465 – the highest number of US companies ever to participate in a trade show outside North America.

With names like General Electric, Honeywell, Eaton, Microsoft, IBM, AT&T, Cisco and Intel, the official list of American exhibitors reads like a Who’s Who of US industry.

Among their ranks are several companies who have perfected the art of data-driven business and who will be demonstrating their mastery of the bit and byte in Hannover.

IBM, for instance, will show how it helped John Deere achieve highly customized tractor production. The exhibitor lineup also features all the big-name US universities and research institutes, among them the Massachusetts Institute of Technology, the University of California, and Georgia Tech University.

They will be showcasing a wide array of research initiatives and advances in everything from combating climate change to redefining industrial robots.

German enterprises will likewise be out in full force at this year’s show, where visitors can – as a Hannover Messe first – immerse themselves in more than 100 real-world application scenarios for Industrie 4.0 technology, the bulk of which is “made in Germany”.

Among them will be smart robots that can navigate factory environments autonomously and production machines that can communicate with human co-workers by means of speech, thus making things easier for them on the job.

Like their US counterparts, German companies are supremely adept at collecting and analyzing data, as will be made abundantly clear in the new “Predictive Maintenance 4.0” display.

“It’s a bit like humans wearing smart watches that can signal impending health issues and caution their wearers to take it easy. In this sense, predictive maintenance is not just about being able to accumulate the necessary data, but also to assess it in meaningful ways.”

Thanks to digitalization, electricity generation is converging with heating/cooling, eMobility and industrial production to culminate in a smart, integrated energy system.

The Energy show at Hannover Messe will tell the technological and economic backstory to this by presenting the many systems, components and services that can serve as the backbone of tomorrow’s fully integrated energy systems.

Alongside German enterprises addressing this theme will be many from around the world, including a strong lineup of from the USA accounting for as many as 60 of the 465 US firms taking part in this year’s Hannover Messe.

Healthy competition can yield a lot in the way of mutually fruitful dialogue, and this will be more than apparent when the leading lights of international industry and politics engage in a series of forums and panel discussions at Hannover Messe.

For example, on the Sunday before the fair opens, Siemens CEO Jo Kaeser and Microsoft CEO Satya Nadella addressed the impact of digitalization on manufacturing.

US President Barack Obama is also be taking part, in the company of US secretary of commerce Penny Pritzker, secretary of transportation Anthony Foxx, and secretary of energy Ernest Moniz.

EU commissioner for digital economy and society Günther Oettinger will give a number of keynotes at a European Commission conference on “Digitizing European Industry” the Monday of the fair. And Maros Sefcovic, vice president of the European Commission and the one in charge of the EU’s Energy Union strategy, will discuss options for a forward-looking European energy and climate policy.

Köckler says: “It’s shaping up to be a fantastic Hannover Messe. Global industry will be setting its sights on Industrie 4.0 and the digitalization of energy systems.

“At Hannover Messe, visitors from all around the world can experience the necessary technologies up close, grasp their potential and discover how they can be implemented for major gains. In the space of just five days, we will be witnessing all the key factors and trends that are going to be shaping industry and the energy sector over the next five years.”