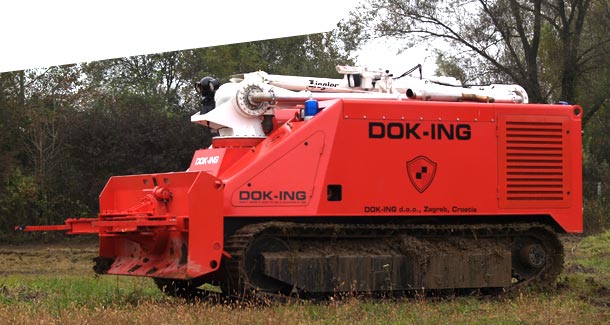 Croation robotics and automation company Dok-Ing is in discussions with Indonesian authorities on the provision of its technologies to help with emergency services.

Konstantin Darmaniyan, Dok-Ing’s chief technical advisor, held a meeting with the representatives of the Jakarta Province Fire and Rescue Brigade to discuss technical and operational advantages of the MVF-5 unmanned application in their work.

The MVF-5 is Dok-Ing’s multifunctional robotic firefighting system developed to extinguish fires in life threatening conditions and inaccessible areas. The system is operated from a safe distance by using remote-control technology. The MVF-5 extends the reach of fire fighters as to protect high risk industrial facilities and other dangerous environments, says the company.

The original design of MVF-5 is based on the technology used in construction of demining systems able to survive mine detonations and other hazardous operations in the most demanding and destructive environments. The low center of gravity combined with powerful engine and comact original structure of the MVF-5 allows excellent manouverability.

Equipped with the latest fire-fighting technologies, plus two storage containers for water and foam, MVF-5 can extinguish fires with minimal damage to itself and its operators, who remain outside the range of danger during operation. The industry-leading components give the operator the capability to use water, foam, or a combination of the both extinguishing liquids.

Using the remote control technology, the MVF-5 system can be operated from a distance up to 1500 m in line of sight. GPS-INS (Global Position System – Inertial Navigation System) would turn the current system into a real robot ensuring the MVF-5 return to the original location, even if radio communication is lost.

A sophisticated video system allows the operator to have full control of the vehicle movement during operation. The video system consists of six high resolution and waterproof cameras. One of the cameras is a thermal camera, which allows the MVF-5 to operate during the reduced visibility conditions. The caremas are positione on the water monitor, gripper attachment and other components allowing the operator to control the machine and its perfomance during various operational modes.