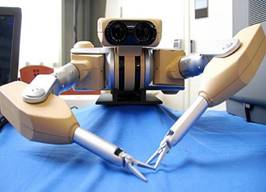 Pranjal Mehta, of Big Market Research, says the surgical robotics market is set for competition, and sees an end to Intuitive Surgical’s dominance

TransEnterix, a medical device company which designs surgical robots, announced last month that it has received an update from the US FDA on the status of its 510(k) filing for the SurgiBot System.

The 510(k) filing is a notification to the relevant US government agencies that the product is set to go to market.

The Federal Drug Administration told TransEnterix that it has not yet decided on the status of the 510(k) submission and the company now expects a favorable decision by end of April.

The US based device manufacturer was expecting a decision from the federal regulator in the Q1 of this year. Getting a nod from the regulator would make SurgiBot the second such device approved to perform general surgery on patients across US.

The communications with FDA have been approval and as market analysts contend the innovative device will be approved with minor variations.

TransEnterix, a US startup, says its products and technology are destined to shake-up robot-assisted surgery in healthcare industry. The company claims to be the only robotics developer that has two robotic designs being ready for surgical applications.

For around two decades, Intuitive Surgical has asserted its dominance in the surgical robotics market with the launch of da Vinci system in 1999; many disruptive surgical robotics technologies have recently come to the market that will challenge this hegemony.

TransEnterix says its single-port SurgiBot system is “superior to the da Vinci system” in many ways, particularly in that it allows surgeons to be in the sterile field rather than just able to monitor the patient sitting behind a console, along with an array of a unique combination of reusable and disposable instruments.

However, the startup is faced with a major constraining factor – limited resources. Soon it will need another large cash infusion to fund its operations; TransEnterix lost about $47 million last year and had about $47 million in cash as declared in February.

The surgical robot was designed and developed in Italy, and acquired by the device maker in 2015 for about $100 million. It is already available for commercial sale across Europe.

Other similar robotics projects by the company have kept speculation rife that TransEnterix will be acquired by some large company that wants to make foray into surgical robots market.

TransEnterix stock is said to have soared nearly 75 per cent over several days after Johnson & Johnson was reported be interested in making acquisitions in the sector.

Johnson & Johnson, an American multinational medical devices manufacturer, last year announced that it would form a collaboration with Verily to create Verb Surgical, a California-based technology firm that wants to “create the future of surgery” with the power of machine learning, advanced imaging and robotic-assisted surgery.

Last month, Google and Johnson & Johnson announced a partnership between Google’s life sciences division and Ethicon that is actively involved in making surgical robots. However, some details of the announcements are yet to be made public. These developments will help to design disruptive technologies in surgical robots.

Surgical robots are gaining traction across healthcare industry in US and Europe. These systems help in conducting minimal invasive surgery and are expected to significantly boost overall surgical outcomes.

The startup is at the forefront of developing numerous procedures in the next few years with its high-end surgical robotic systems.

Insights into disruptive technologies that will shape up the competitive landscape and current and emerging trends are extensively covered in a recent report added by Big Market Research titled World Surgical Robotics Market – Opportunities and Forecast, 2014-2020.

According to the report, the market is estimated to reach $6.4 billion by 2020, globally, registering annual growth of 10.2 per cent along the forecast period.