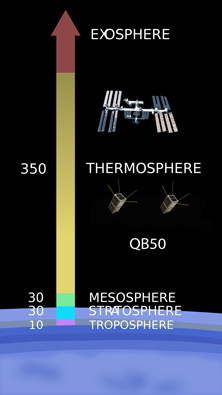 NanoRacks will be deploying a majority of the QB50 satellites from the International Space Station (ISS) utilizing the Company’s NanoRacks CubeSat Deployer. The selection of the ISS as the deployment platform for this program leverages the unique capabilities of the ISS to serve as a test-bed for numerous in-space technologies and research development.

“QB50 is the second major cubesat constellation to be launched into space. We’re proud to be part of the largest international constellation of cubesats,” says Peter Bak, Head of NanoRacks’ European Office. “The research from the QB50 program will aid in research of the lower thermosphere enabling better climate models and helping scientists understand this part of the atmosphere. It also provides the potential to improve space safety by better understanding and predicting objects re-entering the atmosphere.”

A second major goal of the QB50 Program is to show the achievement of affordable, and sustained, access to space for small-scale research missions and planetary exploration, a mission which aligns well with NanoRacks’ goals.

The final list of QB50 satellites that will be flown is still to be announced.