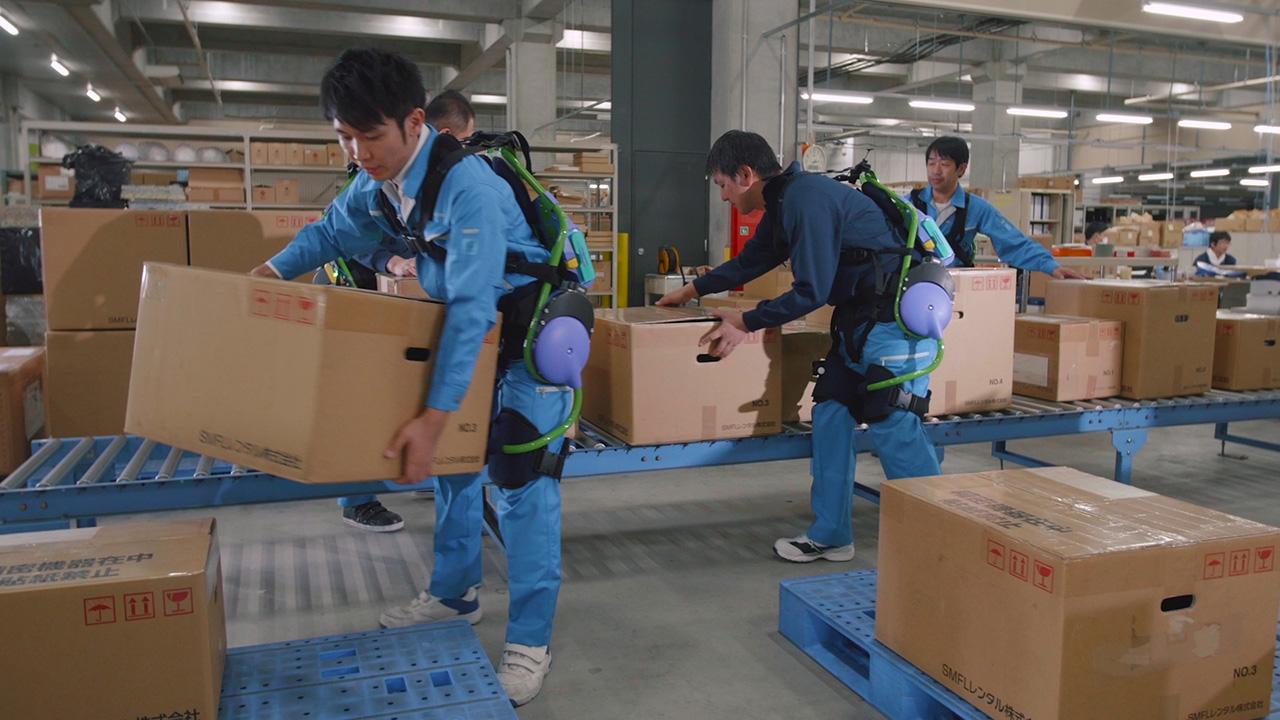 Hiromichi Fujimoto, president of Activelink, suggests the suits could help people become more like robots, which, he implies, would make the world a better place.

“Our mission is to help realize a power barrier-less society by offering a helping hand during manual labor and at other worksites,” says Fujimoto.

“We are proposing robotics to help at these worksites, because there will always be a certain level of work that must be done by people, and these power assist suits can help reduce the physical strain during such work.”

Panasonic and Activelink have developed a number of different suits and robots to help humans become more like industrial robots or elderly care assistant robots.

The AWN-03 was especially developed to provide lower back support, says Panasonic. It automatically senses the user’s motion when lifting and holding heavy objects, and sends a signal to the motors to rotate the gears.

It also raises the user’s upper body while pushing on their thighs, and as a result reduces stress on the user’s lower back by 15kg.

Panasonic calls this one “Ninja” for some reason. By mimicking human motion, the PLN-01 named “Ninja” assists the user’s motion while walking and running, for instance hiking up steep mountain paths during afforestation.

An upper body unit of the “Ninja” is currently being developed, which will help lift and carry heavy items.

The Power Loader is a “powerful suit that can be used during disaster relief, construction, and public works”, says Panasonic. It has four sensors in the hands and feet that control 20 motors.

Panasonic has been in the nursing business for over 18 years in Japan running elderly care facilities and developing devices that contribute to elderly care.

Elderly care may be mentally and physically straining for people who give and receive care, so Panasonic is providing solutions that improve the quality of life of both the elderly and caregivers.

“As Japan has becomes an ageing-society, Panasonic is aspiring to make its contribution by supporting the elderly and their families lead a comfortable life full of smiling faces and laughter,” says Hitoshi Sasaki, assistant director of Sincere Kourien, an elderly care facility run by Panasonic Age-Free.

“There are many instances that can be straining to both caregivers and care recipients. Just moving from the bed to a wheelchair can be a very energy-consuming for both parties.”

Caregivers no longer have to lift residents from the bed to the wheelchair, so it reduces the strain on both the caregiver and residents and also helps maintains residents’ dignity.

The Self-Reliance Support Robot assists the elderly when moving from the bed to the restroom, chairs and so on, and empowers them to perform everyday tasks, such as using the restroom and watching television.

Panasonic claims this robot senses the slightest of movement and can predict how the elderly person is doing based on the information gathered by the sensors.

The motors in this robot only provide the level of power necessary – the power that is lacking – allowing elderly people to use their own remaining muscle strength and thereby preventing unnecessary muscle atrophy and strain.

The robot also reduces strain for the caregiver as well, because they will no longer have to use their own physical strength, adds Panasonic.