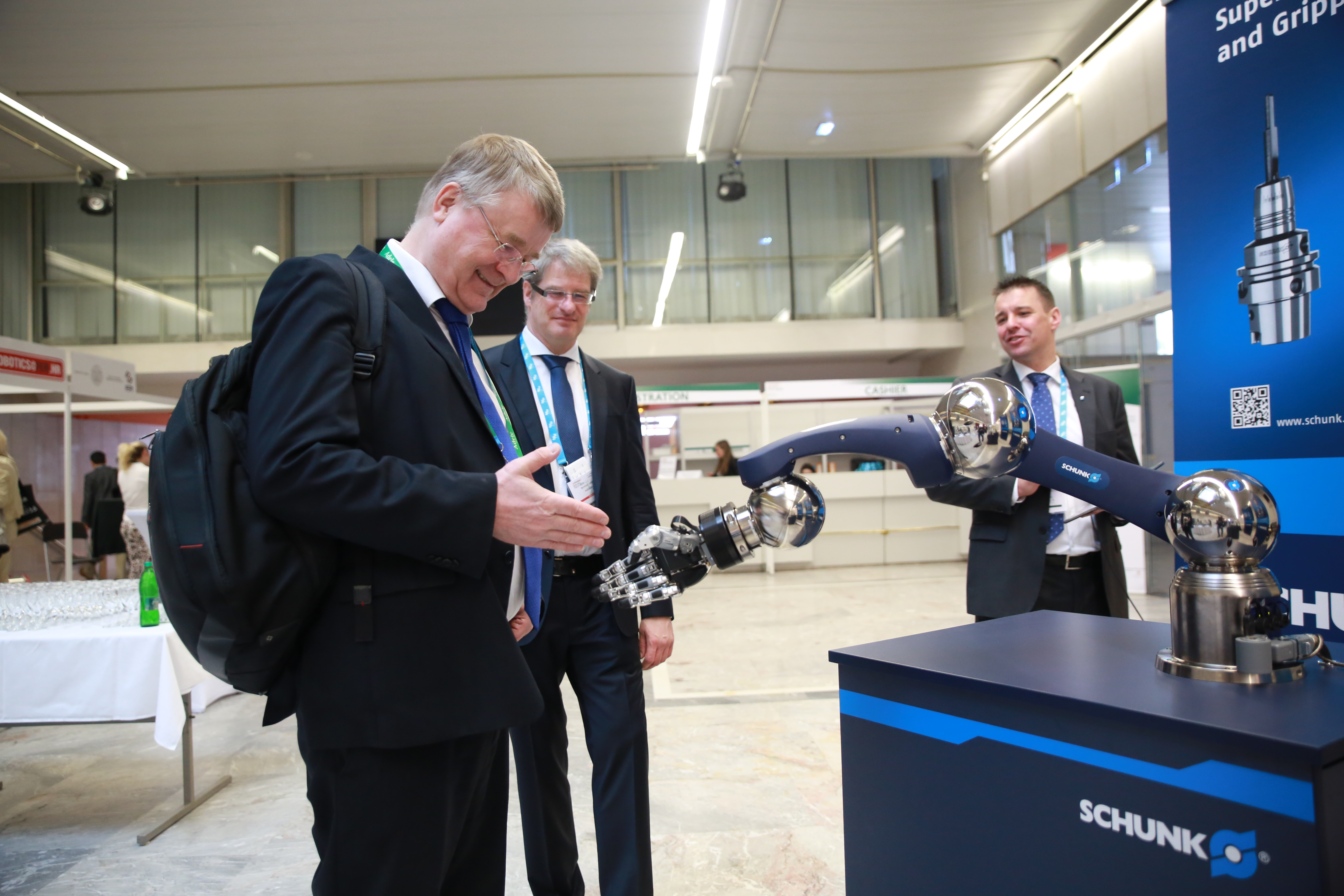 Delegates attending the event spoke of how important it is that Europe maintains its strong position in the robotics industry, and outlines ways it could be done. Here, we convey some of their comments.

In a keynote address, Bernd Liepert, president of euRobotics AISBL and head of innovations in the company Kuka said: “Robotics is a success story of interdisciplinary imagination, innovation, and hard work of engineers, physicists, computer specialists, psychologists, ergonomists and many more.

“Robotics means always solving new problems in the dynamics of reality. You never know in which field and when the next application is popping up. We need this mental richness in Europe to advance in technology and strive for innovative solutions to global problems on this planet.”

Liepert added: “Robotics is a dynamic, interdisciplinary field, where ideas, associations, and creativity merge. To build better robots, for example, there is still plenty of work to be done in ‘mechatronics’ – a term relating to the intelligent combination of mechanics, electronics and information technology.

“Research in this field should aim at human equivalent performance in mobile manipulation and physical interaction in human centred environments. This is only to be achieved with the further development of core robotics technologies, such as perception, planning, control and simulation.”

“We should also look for solutions to let robots work better – together with humans in interdisciplinary teams. This is more than avoiding accidents – we imagine the robot as true partners, as ‘companions’, with capabilities to learn, to help humans, but also to ask humans for assistance, and to react cleverly in situations which are not foreseen.”

Speaking at the opening of the Forum, Markku Markkula, president of the European Committee of the Regions, said: “Regions can spur innovation. The opportunities are not only with the use of robots – but, even more so with the manufacturing of robots. It just needs to mobilise regional expertise and regional entrepreneurship.

“By generating synergies of cooperation among regionally-embedded actors – such as chambers of commerce, local chapters of professional organisations, technology parks, business incubators, universities, clusters, and high-growth start-ups – local and regional authorities can make a major contribution towards this objective.”

He added that regions have a strong advantage: short ways to meet in person, many actors even with family ties, common history and a feeling of working for your “home”. In his opinion, robotics is a transmission belt for creating jobs.

“I know the discussion if robots create jobs or kill jobs. The argument in favour of robots is that robots can boost productivity and hence create new jobs, and also that robots can do certain things that no human was able to do before. It is very clear that new jobs require a different profile of workers. Education and training is a very important target that can be done best on the regional level.”

Markkula stresses that the robots also have the potential to make “old industries”, such as textile and leather goods, which have been lost almost completely to Asia, competitive again in Europe. He is also convinced that robots will be part of the digitised smart urban and smart rural areas. As an example, robots in agriculture would allow to reduce the use of fertiliser and pesticides by more than 95 per cent.

Robotics and AI are ‘key drivers of innovation’

Juha Heikkila, head of the robotics unit at DG Connect, said: “Digitisation leads to innovation in products, processes and business models, and holds major potential for economic growth. Robotics and artificial intelligence are key drivers of this innovation.

“Therefore, Europe needs to maintain leadership in these technologies, to enable wide access to it, to ensure an appropriately skilled workforce and to have smart regulation enabling digitisation.”

Mady Delvaux, a European Parliament member from Luxemburg, said: “We need a balanced European framework for the development of robots and AI.

“A smart regulatory approach seems to be the most appropriate one. The future European and global rules must address issues relating to liability, contract law, international law, company law, standardisation, data protection, privacy, ethics, and many more.”

Matteo Fusari, of the European Investment Bank, said: “Financing advanced robotics falls within the Innovation and skills priority area. Europe is facing a major challenge in terms of competitiveness and innovation and investments are required in order for Europe to remain at the frontier of these key technologies.

“New innovative technologies – and among these advanced robotics and flexible automation – are by definition risky. They meet an uncertain market size and growth, often against powerful incumbents and various barriers to enter new markets.”

Jasper Wesseling, deputy director general for enterprise and innovation at the Ministry of Economy of the Netherlands, said: “Innovation is key for our welfare and wellness an the Innovation Framework needs to stimulate not hinder innovation. We have to join forces in Europe, users of technology, developers and researchers, education and governments need to act together and we need to educate and train the right, multidisciplinary and digital skills.”

Dr Zoran Stančič, the European Commission representative in Slovenia, said: “European economy does not wish to take part in global competition on the basis of cheap labour. At the same time, we must maintain and build the manufacturing industry, with the processing industry already accounting for about 20 per cent of the European GDP. Therefore, the main objective is to achieve a higher-level automation of processes and manufacture, in which robots play a key role.

“The EU decided to invest €700 million in robotics research and innovation by 2020. An equal share of investment is expected from the industry. All these efforts must be understood within a broader context of digitising industry, with a successful introduction of new technologies, such as robotics, cloud computing, internet of things and big data. The European Robotics Forum 2016 in Ljubljana is also an opportunity for closer integration of Slovenian economy and research institutions into the European currents.”

Dr Maja Makovec Brenčič, minister of education, science and sports of the Republic of Slovenia, said: “Our ministry, as an institution responsible for science, has three focuses, scientific excellence, internationalisation and establishing stimulative environment for cooperation within the knowledge triangle.

“Last year Slovenia adopted the smart specialisation strategy, which is a precondition for investment in research and innovation from the structural funds. One of the objectives of the smart specialisation strategy is raising the level of digitalisation with automation and robotisation in manufacturing and increase export of automated industrial systems and equipment by at least 25 per cent by 2023, in particular in tool industry, robotics and smart industrial mechatronic systems. These commitments clearly represent our awareness of importance of development in robotics.

“European Robotics forum has important task to contribute to closer integration in this part of Europe. We share the belief with Mr Uwe Haass, former secretary general euRobotics, that Slovenia can and should play an important role in setting up a network of innovation hubs in this European region, our immediate neighbourhood. Innovation hubs are one of the pillars of the initiative Digitising European Industry.”