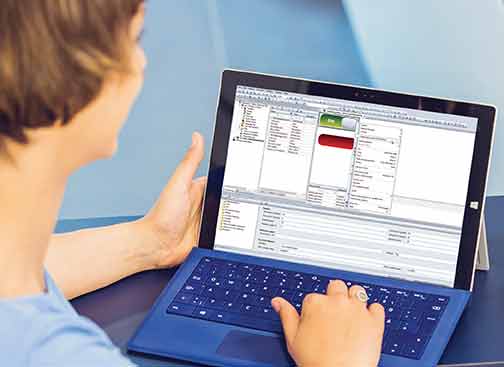 COPA-DATA says the new range is bringing to the market a “comprehensive update of its family of software products”.

The most recent software release from COPA-DATA is not just limited to the zenon Operator (HMI) and zenon Supervisor (SCADA) products, but also includes new versions of its reporting software, zenon Analyzer, as well as the integrated PLC programming environment zenon Logic.

Reinhard Mayr, product manager at COPA-DATA, says: “Our objective in software development was always having a flexible, modular, but at the same time fully-integrated, networked system, the strengths of which bear fruit when interacting with one another.

“To achieve an even better synchronisation of our products, we have decided to present these bundled into one annual zenon release. Of course, there are separate products behind each zenon release as before, which will continue to be purchased, licensed and used separately.”

Highlights of the new zenon release:

The new styles in zenon ensure a consistent look and feel in visualisation projects. They combine graphic properties of screen elements and define parameters, such as line thickness, size or colour for the required elements.

The centrally-saved styles within a global project can then be easily applied to all other elements. The result is a consistent design within a project, but also throughout projects and in multi-user projects. Changes can be made centrally at any time and all linked elements update automatically. Central maintenance ensures easy reuse and quick, error-free configuration.

With the integration of voice over IP into the zenon Message Control module, this application has been equipped with the latest technology for transferring messages. The correct people can be quickly and reliably informed of changes in operation.

In addition, the module has been supplemented with the Notifier App, which is now available as an Android app in the Google Play store. The app detects alarm messages that have been sent as an SMS by Message Control and offers a graphic interface for simple acknowledgment of alarms directly on a smartphone. Users can react quickly and easily to alarms, regardless of location, and instigate the necessary action.

Recipes in the zenon Batch Control module can now easily be transferred from one project to another by means of XML export/import, or edited with external tools. Furthermore, in zenon Editor, XML export/import is available for units and phases. These new features support automated engineering and guarantee considerable time and cost savings.

Command input with the Command Sequencer

A new module has been integrated for the energy sector – the Command Sequencer – which increases productivityconsiderably by simplifying the configuration and writing of command sequences. Operators can compile, test and apply command sequences themselves, intuitively and without programming knowledge. The same also applies for changes and command sequences.

Project configuration is carried out in a graphic editor in zenon Runtime, either by selecting and compiling the individual steps, or by means of Teaching. The advantages of Command Sequencer are not just limited to its ease of use, but alsothat possible errors are avoided from the first stage of configuration. All operations are subject to the zenon user administration. This defines who can create, operate or amend the command sequences and how each of these is done, thus ensuring high security standards.

With the HTML Web Engine in zenon, dashboards can easily be displayed using any desired web browser. COPA-DATA offers a further possibility to use zenon with mobile devices. The screen only needs to be drawn once in the zenon Editor and can be output directly as an HTML 5 screen. For projects that use the HTML Web Engine, only one central engineering tool, the zenon Editor, is required.

COPA-DATA has developed the native S7 TIA driver for zenon, for communication with the Siemens Totally Integrated Automation (TIA) portal. COPA-DATA is the first company whose automation software can directly use Siemens’ driver communication, including optimised module access for the SIMATIC S7-1200 and SIMATIC S7-1500 series. Variables of TIA-based projects can now be used in zenon projects – the only requirement for this is the TIA project file as configuration information in zenon.

In the new version of the COPA-DATA reporting software zenon Analyzer, there is a new design of the Report Launcher used for displaying reports in a web browser. The clear design of the user interface offers increased usability and the enhanced browser support ensures more flexibility. zenon Analyzer 3 also offers some new report templates, such as the efficiency class report, which enhances the functionalities in the energy data management area.

In addition to many further reporting possibilities (CEL reports, report with dynamic normalisation etc.), a focus of the new product version is line management. The new line analysis allows reporting over the entire production line on the basis of lots. This way, a lot can be traced transparently throughout the complete line, displaying all losses and interruptions.

The basis of meaningful analysis is the database that the software accesses. zenon Analyzer 3 uses the latest technology for this and will only be supplied once Microsoft SQL Server 2016 is available. In addition, cloud storage can also be used natively with the connection of Azure SQL.