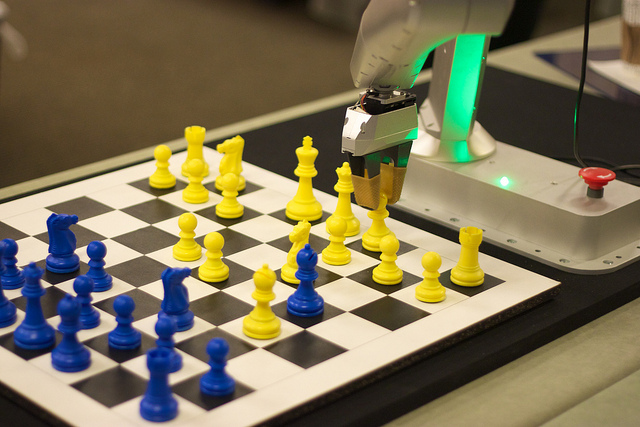 The current struggles human player Lee Seedol is facing while playing the ancient Chinese board game Go against an artificially intelligent machine learning program is being watched with interest by the world’s media as well as computer scientists everywhere, probably.

One of those computer scientists, however, says he’s not that bothered. Professor Alois Knoll, co-ordinator of the European Clearing House for Open Robotics Development (Echord), says Google DeepMind AlphaGo is essentially just a software program inside a computer, which is much easier to develop than a mechatronics system.

“A machine or helper that can only help you play Go probably not something on which you’d spend much money,” says Knoll, who is one of the key scientists involved in the $1.5 billion-dollar Human Brain Project.

Speaking exclusively to Robotics and Automation News in a recent interview, Knoll differentiates between AI which resides within a computer program and AI that is integral to a mechatronics system, such as a robotics. Robotics and mechatronics are a lot more complicated, he says.

“But here [in robotics] we are talking about a computer or an artificial intelligence built into a body, which is a totally different ball game because what you expect from a bodied intelligence is that it reacts to changes in the environment, it reacts to users’ instructions, and it can develop some independence in moving around, in doing something, in assembling something, in being in an assistance role for hospital, and so on – and that is much, much more difficult.”

Knoll, who has an MSc degree in Electrical/Communications Engineering and a PhD in Computer Science, hopes more people take on the challenges and unsolved problems within the field of robotics and mechatronics. “There are quite a few problems in mechatronics … which are largely unsolved,” he says. “So, for the advancement of the whole field, I think it would be beneficial if more people … were more interested in mechatronics, and control of bodies and things like that.”

However, he cautioned that while many sectors of robotics have seen somewhat accelerated growth rates in recent years, particularly with China’s demand for industrial robots, it’s not a get-rich-quick scheme.

“It’s certainly true that robotics has been growing at a more accelerated rate now than it has been in recent years, but I’m a bit cautious to raise expectations that this is the next big thing and that the next Google is just around the corner in robotics.

“I don’t think that’s going to happen, simply because this is very complex, it’s a combination of software and hardware, you need to master a lot of fields to be successful in this area, and there’s not too many people who can actually do that. So that will limit the growth.

“But of course the need – the demand – is obvious. For example, the assistance systems we have for autonomous cars, which is also a specialised type of robot. So the potential of the sector is huge, but it’s not an easy sector to navigate.”