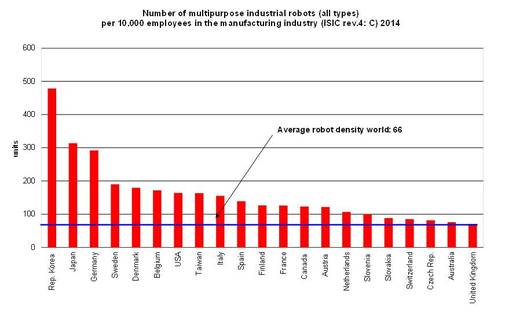 The robotic density figure is a key performance indicator for gauging the current degree of automation within the international markets: For example, the average global robotic density in producing industries lies at 66  robot units per 10,000 employees.

A total of 21 countries  have an above-average robotic density (Fig. 1). More than one-half of these highly automated countries are located in the European Union (14 countries). Then there are three Asian economies (South Korea, Japan, Taiwan), as well as the USA and Canada.

“The robotic boom is laying down an important milestone in the realisation of the fourth industrial revolution”, says Joe Gemma, President of the International Federation of Robotics. “With their digital interfaces, industrial robots can be seamlessly integrated into the networked structures of smart factories. This is a benefit exploited by highly automated economies and by countries adopting a new industrial focus. Further impetus is coming into the form of the technological breakthrough in human-robot collaboration: Robotic workers will in future be found working hand-in-hand with human staff, helping to replace traditional, rigid production processes with flexible structures.”