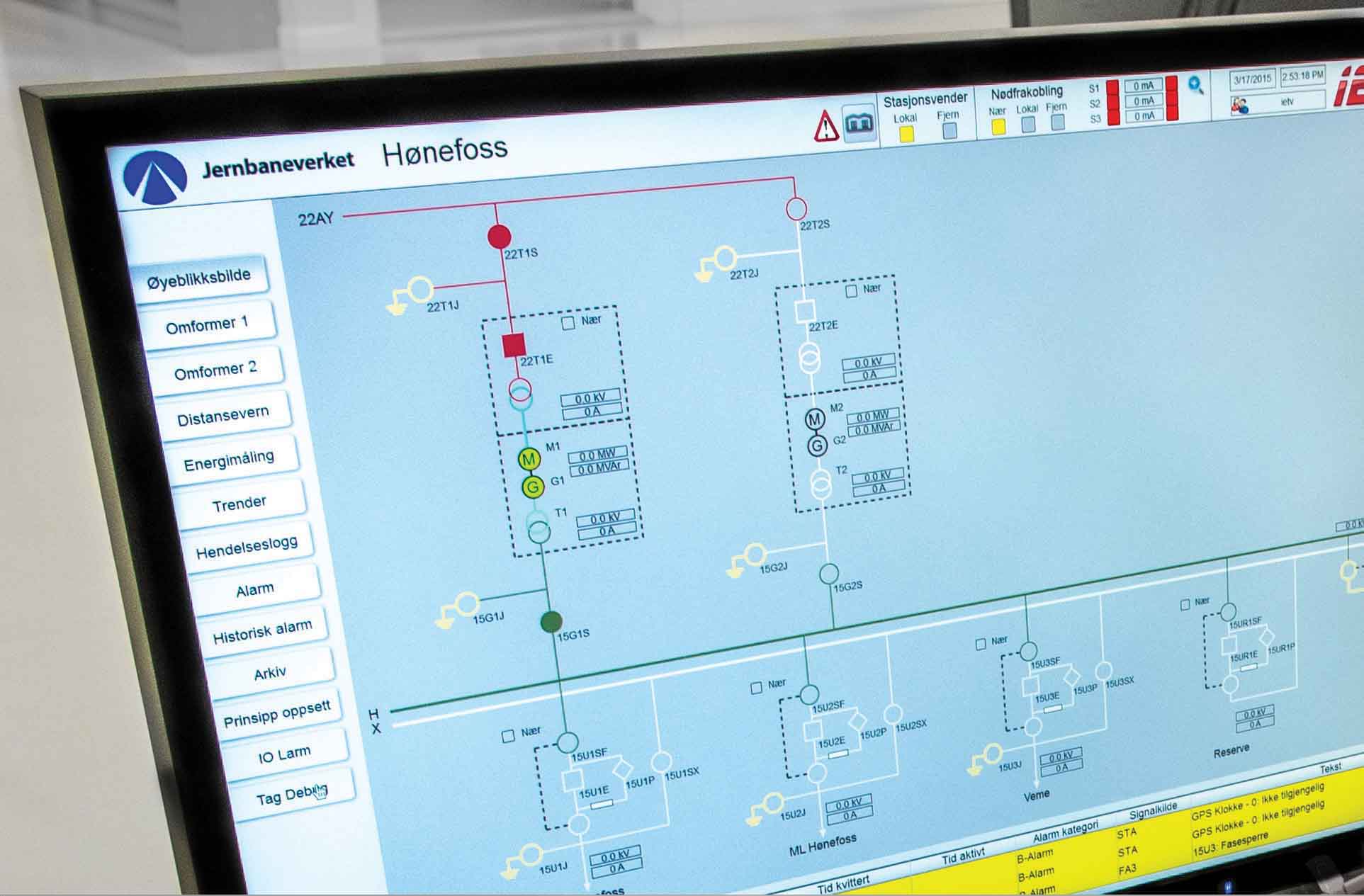 The technology for controlling the power transformer stations throughout its nationwide operations was more than forty years old in some areas, so a modern solution for controlling and monitoring these stations was required. The decision was made in favor of zenon, the HMI/SCADA software from COPA-DATA.

Accomplishing a major reorganization of the technical electrical infrastructure for a national railroad network is by no means an easy task. It operates on its own specific alternating current frequency, and uses numerous existing power transformer stations which are situated throughout the network.

Before any solution could be considered, a thorough analysis of the current infrastructure was required in order to produce a detailed step-by-step plan for the entire upgrade. By upgrading the network’s performance, the project will give Jernbaneverket the potential to meet today’s requirements and standards.

However, the implementation of the whole upgrade operation is complicated by the fact it needs to take place without disrupting the regular train service. A challenge, to say the least.

Much of the technical infrastructure at the network’s substations dates back to the sixties and seventies, when the last major change in technology took place. Outdated technology results in poor performance, and requires regular attention and maintenance.

The fact that this maintenance has to be performed in-situ, means that skilled and qualified maintenance staff need to travel to the substations on a regular basis. This travelling takes up time and is not very efficient. Consequently, the costs rise continuously.

A modern solution would result in big improvements to the daily routines for controlling and running the power network, and also add the capability to control every individual electrical substation from the main operational headquarters. Improved safety and a better working environment for the employees are also important factors in the equation.

NNRA/Jernbaneverket began by initiating a series of pilot projects. These projects marked the starting point for this huge and complex upgrade to the technology controlling the entire network.

The Swedish System Integrator, IETV, a Qualified Partner of the COPA-DATA Partner Community, was selected for one of the pilot projects. The scope of this pilot was the complete rebuilding of the substation in Lundamo, south of Trondheim.

For the project, IETV created a completely new concept for the controlling and monitoring equipment, including all hardware and software solutions. IETV chose zenon, COPA-DATA’s control and monitoring software, as the SCADA platform for the concept.

Malin Fridmar, Project Manager at IETV, explains why IETV felt zenon was the best choice for the project: “We chose zenon as the HMI/SCADA because it offers a complete solution for the IEC 61850 protocol, which is vital in this type of application.”

Get the train rolling

The pilot project concept took six months to design and deploy. Based on the success of the pilot project, Jernbaneverket selected IETV to rebuild and modernize the controlling and monitoring equipment for sixteen additional electrical substations in its network.

This framework agreement runs until 2020, and production is now progressing at full speed. Every project at each site comprises several steps: first, IETV visits the location to take photos and make notes about the specific installation and requirements for the substation in question. Then, a complete solution for the electronic schema and circuits is designed. When the design is finalized and approved, the metal cases for the electronics can be built, and the complex work of programming every circuit can begin.

NNRA/Jernbaneverket chose a solution based on zenon for many reasons. The built-in flexibility is one key reason – since a zenon-based solution is highly scalable; from a simple HMI all the way to a zenon Energy Edition supervisory system. zenon’s uniquely open communication is another key benefit. zenon incorporates an Integrated Gateway to the central control stations, with communication over IEC 60870-5-104.

Internal communication inside the substations is handled with Siemens and VAMP relay protection systems over IEC 61850, and also with Beckhoff PLCs via IEC 60870-5-104.

Two further major contributions in favor of the zenon-based platform are the fact that zenon enables IETV to easily create intuitive, modern user interfaces at each location for the operators, plus zenon’s ability to enable the users to adapt their own user interfaces within the parameters of the general solution.

A platform to take rail transport into the future

The Lundamo project has been working at full tilt for one year now, and the response from the everyday users of the system is very clear. Jernbaneverket reports that operators and maintenance staff are very satisfied with the entire solution.

A key factor in its success is the vastly improved reliability. An electrical substation does not require increased productivity. Instead, it focuses entirely on reliability over a longer period of time.

The new solution has resulted in a big reduction in the need for reactive maintenance or troubleshooting, since it is now possible to control and operate the substations from the control room at Jernbaneverket’s headquarters. Alerts about possible faults or events are acknowledged much earlier in the process too, which makes them far easier to resolve.

A vastly reduced scheduled maintenance program is another important differentiator compared with the old solution. The new zenon-based solution for operating, controlling and monitoring the railroad’s power network on a daily basis has proved itself as a reliable platform over the long run.

Roland Johansson, Head of Technical Development at IETV is delighted with the success of the project. He says: “Zenon has proven itself the perfect solution here; it is a SCADA solution for the entire energy corporation.”