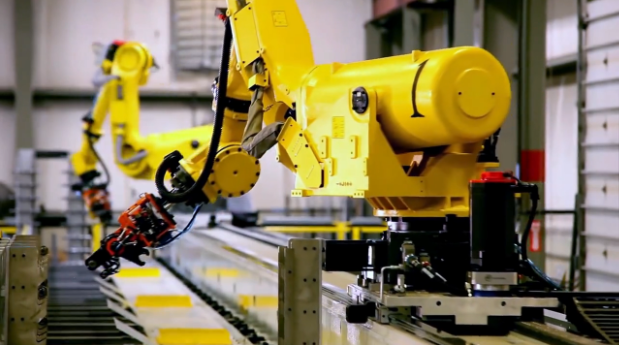 The teach pendant is still used for refinements and modifications after the machine goes online, into work, but nowadays most industrial robots are prepared for a life of work using offline programming.

General Motors is said to be the first company to have bought the industrial robotic arm ubiquitous in the industry around the world today. The original version was called the Unimate, and was developed by George Devol and Joseph Engelberger in the late 1950s and early 1960s. GM bought one in 1961.

So it is perhaps fitting that GM is among the first to connect its industrial robots to a centralised cloud, its own IT network, working with Cisco and Fanuc. The automaker wants to keep its productions lines running without interruption.

In exclusive comments to Robotics & Automation News, Marty Linn, manager – advanced automation technology at GM, says there are plenty of benefits of connecting its industrial robots to its cloud.

“All of GM’s robots are connected globally through our GM Information Technology infrastructure,” says Linn. “The connection of these robots to the infrastructure allows us to back up programs and collect specific data from which we monitor the robot’s operational performance.

“By monitoring the operational performance of the robots, as well as other key systems, GM is able to control the manufacturing process and ensure the final quality of the products produced.

“The robots are able to tell us how they are doing, and if there are any problems that need attention. We are continuing to expand this performance control through all areas of manufacturing.”

GM has an annual turnover of more than $150 billion. It employs some 200,000 people around the world. And it produced approximately 10 millions vehicles in 2015.

No one has counted up how many robots the company has, but it’s probably several thousand, and all of them are programmed using both offline and online methods.

“GM uses offline simulation and programming, as well as ‘teach pendant’ programming to set up and train its robots,” says Linn. “It depends on the specific situation for which method is used.”

The main shortcoming of offline programming is that the robot path relies on the accuracy of the robot instead of the repeatability. Robots are highly repeatable but not very accurate. The accuracy of the robots can be drastically improved through robot calibration. Robot calibration means that the robot kinematics is changed to take into account small errors – usually geometric and elastic parameters. These errors are identified by taking measurements with an external measurement system.

As for which brand of robot GM uses, Linn says that the company has changed its eclectic approach for an exclusive one. “GM has used a variety of different robot manufacturers products over the years,” he says. “GM uses FANUC robots now. The robots we purchase are standard Fanuc robots with some unique customization to conform to GM’s common global controls architecture.”

Not all supersized automakers connect up their robots. Toyota, which in some years sells more cars than anyone else, has factories all over the world. In the UK, it has a factory at Burnaston, Derbyshire.

In exclusive comments to Robotics and Automation News, Neil Haynes, senior manager, weld engineering and maintenance, says: “We do not have any cloud connected robots in the factory at Burnaston.

“The only connected item we have is our CMM machine [coordinate measuring machine] for confirming the body in white accuracy. It’s measure result is shared automatically to TMC [Toyota Motor Corporation] and can be viewed/checked by others. It allows investigations and comparisons of data from other sites with a similar body structure or common child parts.”

Haynes adds that the robots used at Burnaston are prepared using both methods. “Our robots are initially ‘trained’ by offline programming in the first instance and in many cases this will remain for the duration of the model’s life. If we wish to make any tuning, then this is by the ‘pendant’ method.”

And unlike GM, Toyota – in Burnaston anyway –  uses a variety of robots. “On site at Burnaston weld shop we have Kawasaki, Nachi and Yaskawa,” says Haynes.

On offline programming, Nubiola says: “If you have to follow complex curves, like engraving text into an object or do robot machining, you need simulation software and offline programming because teaching the path manually would take too long.

“You can use dedicated software to define your manufacturing operation using a standard format (such as G-code for robot milling or a DXF file for 2D cutting) and then easily convert it to a robot program.

“On the other hand, for a pick and place operation that requires teaching 4 points it is more appropriate to teach manually using the teach pendant. For these type of simple robot movements, simulation software might be used to decide what robot is most appropriate to do that task, however, programs are usually taught on the shop floor.”

On the subject of connecting industrial robots together through the cloud, Nubiola says the process is theoretically straightforward. “It does not take a dedicated IT team or special hardware to automatically transfer a program from the computer to the robot,” he says.

“Most robots have an Ethernet connection and it allows you to connect them to a Network. It is very easy to use the FTP protocol to transfer the programs directly from the computer to the robot – this is the same protocol used when you download a file from a website. That means that you can easily program a robot from anywhere in the world.

“However, many robot programmers do not know how to use these robots very well. I believe that factories are adopting these new technologies very slowly. Many engineers still transfer programs using a USB disk. This is a very time consuming task. RoboDK allows you to transfer the programs directly to the robot even if it is right beside you or on the other side of the world.”