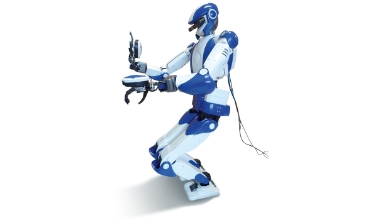 The programme will be dedicated to the research and development of humanoid robotic technology to perform complex manufacturing tasks in factories. The majority of research will be conducted at the CNRS-AIST Joint Robotics Laboratory (JRL), which was established in 2004 on the AIST campus in Tsukuba, Japan.

Satoshi Sekiguchi, Director General of the Department of Information Technology and Human Factors at AIST, inaugurated the new project together with Jean-Yves Marzin, Head of the CNRS Institute for Engineering and Systems Sciences (INSIS), and Sébastien Remy, Head of Airbus Group Innovations.

The signing of the partnership agreement was witnessed by France’s Ambassador to Japan, His Excellency Thierry Dana, on the premises of the French Republic’s Embassy.

“The use of robotics has become ubiquitous in our industry,” says Remy. “Both AIST and CNRS researchers are at the cutting edge of humanoid robotics research, and we are excited about the opportunity to meld our expertise with theirs on the further development of this key technology for manufacturing.”

Airbus Group and the CNRS-AIST JRL are also collaborating on COMANOID, a four-year research project launched in early 2015 as part of the European Commission’s Horizon 2020 programme, which aims at deploying humanoid robots to achieve non-added value tasks that have been identified by Airbus Group in civilian airliner assembly operations.

The company says introducing humanoid technology into aeronautical assembly lines is expected to support human operators in performing the most tedious and physically demanding parts of the manufacturing process, freeing up highly skilled workers to perform higher, value-added tasks.

Designing robots with a humanoid form will enhance both their dexterity and versatility, making them suitable for tackling a large range of tasks in a variety of environments – all without having to make significant changes to manufacturing processes originally designed for humans.

Realising viable humanoid robotics, however, will require researchers to develop new algorithms in multi-contact planning and control to give robots the sort of human ‘hand-eye coordination’ that will allow them to function effectively in confined and poorly accessible spaces. These algorithms will be tested on a set of use-cases drawn from different Airbus Group Divisions and plants, in which the realism and complexity will be increased every year.

Project research will be based on the HRP-2 and HRP-4 robots (human-sized humanoid research platforms) owned by the JRL, and demonstrations of the use-cases will be performed at different Airbus Group production sites around the globe.

The project will be supervised by a scientific board composed of Airbus Group, AIST and CNRS members, and a steering board including representatives of all three project partners and members of the Japanese Society for the Promotion of Science (JSPS) and the Japanese Ministry of Economy, Trade and Industry (METI).