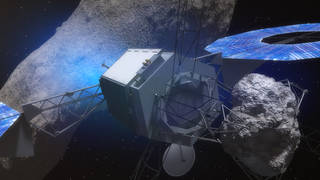 Earth is under constant attack from alien rocks, apparently. Now, NASA has decided to do something about it

Space Systems Loral (SSL), a provider of commercial satellites, has received a contract from NASA’s Jet Propulsion Laboratory (JPL) to conduct first phase design studies for a spacecraft that can travel to an asteroid, remove a boulder, and redirect it into a lunar orbit to prepare it for a visit by astronauts in the 2020’s.

In keeping with NASA’s strategy to leverage commercially available capabilities, SSL’s spacecraft design for the Asteroid Redirect Robotic Mission (ARRM) will be based on its popular commercial geostationary (GEO) satellite, which combines power, propulsion and value. There are currently 80 SSL GEO spacecraft in orbit.

“SSL is pleased to have this opportunity to work with JPL on the Asteroid Redirect Mission,” said John Celli, president of SSL. “We look forward to applying our proven technologies, including our very successful experience delivering high power satellites with electric propulsion systems for our commercial GEO customers, to help JPL reduce risks and meet the cost target for this exciting mission.”

The goal of the Asteroid Redirect Robotic Mission (ARRM) is to demonstrate the use of a solar electric propulsion based spacecraft to move and maneuver large payloads, including a boulder of up to 20 tons, as a proving ground for future human spaceflight to Mars.

SSL is one of four companies that received contracts from JPL for design studies for the spacecraft for this mission. Its extensive experience with solar electric propulsion includes 18 spacecraft on orbit today, the first of which launched in 2004.

SSL is also working as an industry partner to JPL to study the use of its spacecraft bus for a project that is in the running to be NASA’s next Discovery mission and would explore the metal asteroid called Psyche.

Previously, SSL demonstrated the value and reliability of commercial industry when it provided NASA Ames with a propulsion system for the highly successful Lunar Atmosphere Dust Environment Explorer (LADEE), which completed its mission in 2014.