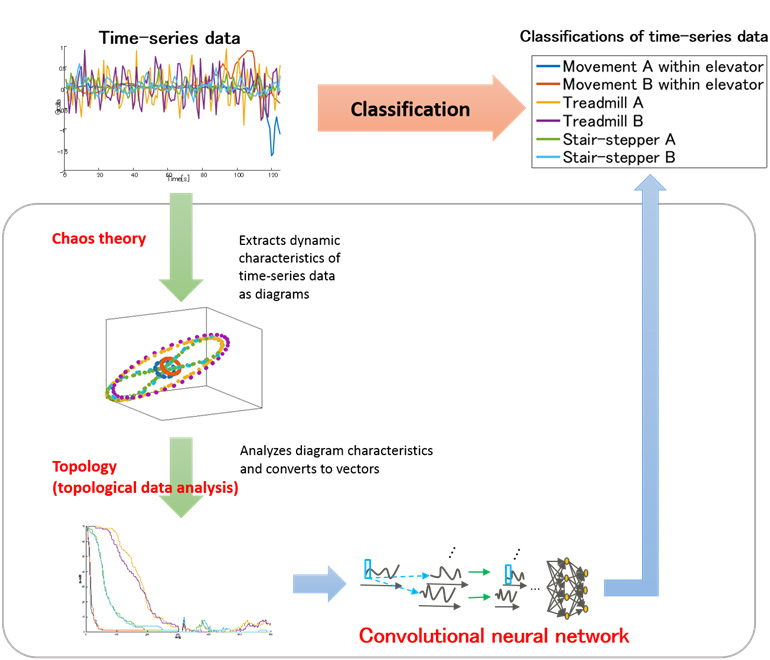 Fujitsu claims it has developed a new deep learning technology to analyse time-series data with high precision, a discovery that could help improve the efficiency of embedded chips in wearables and devices, for example.

When applied to Internet of Things data, the company says, its new technology “significantly improves accuracy by about 25 per cent compared to previous technology”.

Time-series data – which is basically continuous monitoring but with data taken at specific regular times, such as every millisecond – can be subject to severe volatility, making it difficult for people to discern patterns in the data.

Deep learning technology, which is attracting attention as a breakthrough in the advance of artificial intelligence, has achieved extremely high recognition accuracy with images and speech, but the types of data to which it can be applied is still limited.

In particular, it has been difficult to accurately and automatically classify volatile time-series data – such as that taken from IoT devices – of which people have difficulty discerning patterns.

According to the company, benchmark tests held at UC Irvine Machine Learning Repository that classified time-series data captured from gyroscopes in wearable devices, the new technology was found to achieve roughly 85 per cent accuracy, which is about a 25 per cent improvement over existing technology.

This technology will be used in Fujitsu’s Human Centric AI Zinrai artificial intelligence technology, which the company says “brings together and systematizes the fields of sensing and recognition, knowledge processing, and decision making and support, as well as the learning and other AI-related technologies and knowledge generated by Fujitsu”.

In recent years, in the field of machine learning, which is a central technology in artificial intelligence, deep learning technology has been attracting attention as a way to automatically extract feature values needed to interpret and assess phenomena without rules being taught manually.

Especially in the IoT era, massive volumes of time-series data are being accumulated from devices. By applying deep learning to this data and classifying it with a high degree of accuracy, further analyses can be performed, holding the prospect that it will lead to the creation of new value and the opening of new business areas.
Issues

Deep learning is a potent machine learning technique, and it is attracting attention as a breakthrough in the progress of artificial intelligence, but so far it has only been able to be effectively applied to limited types of data, such as images and speech.

In particular, for complex time-series data that is subject to severe oscillations and captured by sensors embedded in IoT devices, it has so far been difficult to achieve highly accurate classifications using deep learning or any other machine learning techniques.

The technology uses the following procedures to learn and classify:

Numerical data captured by sensors are represented superficially as the product of a complex combination of dynamic movements. While it is difficult to directly investigate the mechanisms of these dynamic movements, plotting changes over time on a graph is known to reveal characteristic tracks for each mechanism of movement. Applying this graphic approach makes it possible to distinguish between the time-series data via diagrams.

Because it is difficult to directly apply machine learning to the diagrams created in step 1, Fujitsu Laboratories applied topological data analysis to express features of the diagrams as numbers. With this method, rather than the features one might normally associate with a graphical image, the number of holes contained in the diagram and the major shape features are analyzed and then converted into a propriety vector representation.

Using the time-series data from gyroscopic sensors built into wearable devices, this technology was found to achieve an accuracy of approximately 85 per cent, an improvement of about 25 per cent over existing techniques, on the UC Irvine Machine Learning Repository benchmark test for classifying human activities.

In tests to infer mental states using brainwave time-series data, this technique achieved an accuracy of about 77 per cent, a roughly 20 per cent improvement over existing techniques.

This technology extends the types of data to which deep learning can be applied to time-series data. Moreover, because it can very accurately classify time-series data with severe oscillations, which people have difficulty discerning, it enables new types of analyses.

For example, using IoT devices, it could be used to accurately detect equipment anomalies or forecast breakdowns in factories, or could be used to analyze vital-signs data to assist with medical diagnoses and treatment. In ways such as these, it is expected that this technology will bring advancements to a variety of fields through artificial intelligence.

Fujitsu Laboratories will work on further improving the accuracy of its time-series data classification technology with the aim of a practical implementation of it in fiscal 2016 as a core part of Human Centric AI Zinrai.

The company is also working to broaden the application of deep learning to types of data other than images, sounds, and time series, and to perform more sophisticated data analysis.