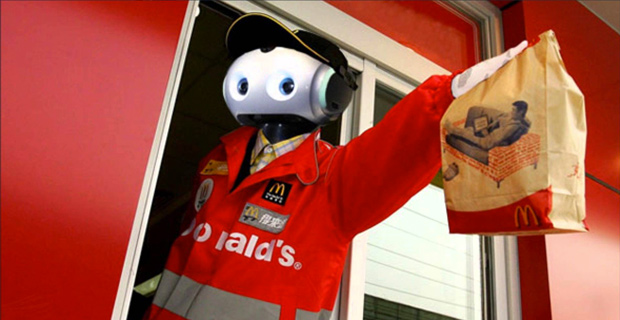 According to Statista, almost 4 million people in the US work in the fast food industry. McDonald’s, arguably the most famous fast food restaurant chain in the world, employs around half a million people.

It’s important to add the word people because increasingly employees in the fast food business are not people – they’re robots.

In a terrifying move last year, McDonald’s opened a restaurant in Phoenix, Arizona which only employed robots. And the company recently announced that it plans to open no less than 25,000 robot-run restaurants by the end of this year.

The company already has almost 40,000 outlets in more than 100 countries worldwide, and has annual revenues approaching $30 billion a year and declared profits of about $5 billion.

But the company claims that it has suffered its first earnings decline in a decade – a 10 per cent drop in one of its quarters last year – and new CEO Steve Easterbrook said the results were “disappointing”.

Some appearance of panic ensued following the earnings drop, and led to the ousting of former CEO Don Thomson. But McDonald’s real concern could be the increasing popularity of its younger and leaner competitors.

CNN says food chains such as Shake Shack, Panera and Chipotle are drawing in ever-growing numbers of starving young people.

Easterbrook told CNN, “There is no silver bullet. No one move will turn a business. There’s been a decline for nearly three years.”

But McDonald’s seems to have decided that robotics is the silver bullet. It’s always had a certain level of automation, but with the new AI-driven robotics technology available now, it could well do away with almost all its human employees.

One of the companies which has developed robots specifically for fast food work is Momentum Machines. According to Next News Network, the machine is capable of putting out one burger every 10 seconds (see video, above).

There’s no point wondering how fast a human worker could do it because McDonald’s and probably all the other fast food chains have already decided that it’s not just the speed advantage; robots are likely to be more efficient, won’t get tired and be more hygienic.

And no matter how cheap human labour gets, robots don’t ask for money, so they can’t compete on that front either.

Fast food workers in Manchester, New Hampshire have recently organised demonstrations in support of what’s become known as the “Fight for $15”. In other words, they want McDonald’s and other fast food companies to pay workers a minimum of $15 an hour.

Given that the US national minimum wage in the is legally set at $7.25, looks like they’re in for a tough fight. But they’ve been given a boost by New York’s decision to fall in line with San Francisco, Los Angeles and Seattle and institute minimum pay for fast food workers at $15. Other states pay anywhere between $15 and $7.25. Georgia pays $5.15, while some states don’t have a minimum wage.

McDonald’s is actually a bit behind the global curve when it comes to robotics in restaurants. Japanese chains are reported to be going completely robotics and automation crazy. But that’s to be expected in Japan, where robots are employed almost everywhere, most recently by Japan Airlines at Haneda Airport.

But McDonald’s has apparently set its mind on the robotics route and is unlikely to allow upstarts from Japan or from anywhere else to erode its business any further.

Paul Horner, a spokesman for McDonald’s, told CNN that because of the demand for a $15 an hour minimum wage, the company has been playing with the idea of a restaurant run entirely by robots for years and believes their “McRobots” are the answer.

“These things are great! They get their work done in a fast and orderly manner, plus they don’t ask for cigarette breaks,” Horner laughed.

“With the increasing demand for a minimum wage of $15 an hour and the protests getting worse every day, this is something we have to implement. Plus with the tremendous margin of human error, poor hygiene, lack of education, laziness, as well as the recent advancements in artificial intelligence it just make sense to automate our restaurants now rather than later.”

As well as McDonald’s, there will also be robots at Wendy’s. The Wall Street Journal reported a few months ago that the company’s CFO, Todd Penegor, said: “We continue to look at initiatives and how we work to offset any impacts of future wage inflation through technology initiatives, whether that’s customer self-order kiosks, whether that’s automating more in the back of the house in the restaurant. And you’ll see a lot more coming on that front.”