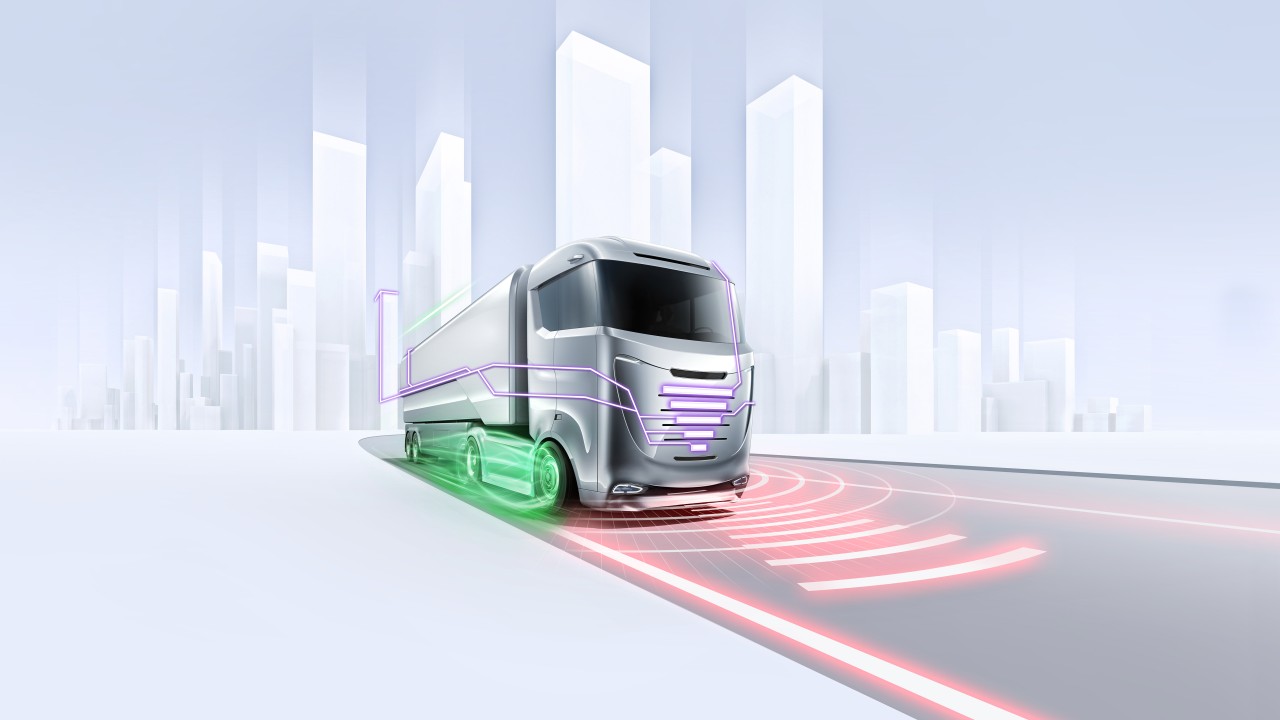 Bosch has unveiled a long list of ideas for future trucks, which it envisions as having much more autonomous technology and being powered by an electric engine.

Apparently, the company also believes digital side-view mirrors are the way forward, as well as a “digital instrument cluster”, which is probably the same as a “virtual dashboard”.

In fact, “digital” is at the heart of almost all the new ideas, with computers being used for cloud connectivity, predictive diagnostics and many other new functions and services.

These are not technologies that Bosch wants to develop at some time in the distant future – they are all technologies that are available today, and the company will be presenting them at the IAA Commercial Vehicles trade show in Germany next month.

Bosch says the trucks of tomorrow will be “accident-free, stress-free, and emissions-free”, with connected services are making life easier for truck drivers and logistics specialists.

While we won’t list all of the new innovations Bosch has published, we thought we would highlight the technologies relating to driver assistance systems.

Turn warning: Especially in downtown areas, truck drivers need to keep an eye on traffic, traffic lights, and road signs, all while also watching out for pedestrians and cyclists. In the future, Bosch’s turn warning will assist them with turning maneuvers in complex situations. Radar sensors detect crossing pedestrians and cyclists in ample time and warn truck drivers of an imminent collision, allowing them to promptly brake or take evasive action.

Blind-spot recognition: Whether in the city or on the freeway, it is often difficult for drivers of commercial vehicles to maintain an overview of the areas next to and diagonally behind them. The blind-spot recognition uses radar sensors to monitor the areas next to the vehicle, detect other road users, and warn the driver. This function also alerts drivers of imminent collisions when changing lanes.

Predictive emergency braking: Systems for automatic emergency braking for commercial vehicles have been mandatory across the EU since fall 2015 for all trucks with a gross vehicle weight of more than eight metric tons. Bosch’s solution uses a combination of a multi-purpose camera and a radar sensor, both installed at the front end of the truck. The radar sensor detects objects in front of the vehicle and determines their speed as well as their position relative to the vehicle. If there is a risk of collision, the system warns the driver. If the driver doesn’t react, the system automatically triggers an emergency braking maneuver.

Lane assistants: These use camera data to ensure that trucks don’t unintentionally leave their lane. The lane-departure warning alerts drivers that they are in danger of drifting out of their lane by, for example, vibrating the steering wheel. The lane-keeping assistant keeps the vehicle in its lane by making gentle steering interventions.

E-bikes and electrification in general

Bosch has also developed what it calls an “e-cargo bike” (pictured above) for logistics, and a cargo tricycle with a 48-volt powertrain. Electric systems have also found their way into other vehicles across its range.

Bosch has been transforming its business for the past two or three years in order to better fit in with the attitudes of younger people and the market in general, an increasing number of whom seem to be turning away from diesel, petrol and becoming more interested in cleaner technologies.

Electrification would appear to be the way forward long term. Electric engines may not take over from the petrol engine overnight, but there does seem to be an irreversible trend developing that is looking to leave fossil fuels behind because they are seen as polluting.

Bosch employs around 390,000 people worldwide, with anywhere between 10,000 and 50,000 of those people working on diesel engines and systems.

The company has already invested billions in building factories which make semiconductor technology, which is fundamental to all computer electronics – not just in cars.

This may help the company to continue to be an industrial giant going forward as people and governments increasingly reject diesel.

Bosch can be found at the IAA Commercial Vehicles trade show in Germany next month at booth A01 in hall 16.