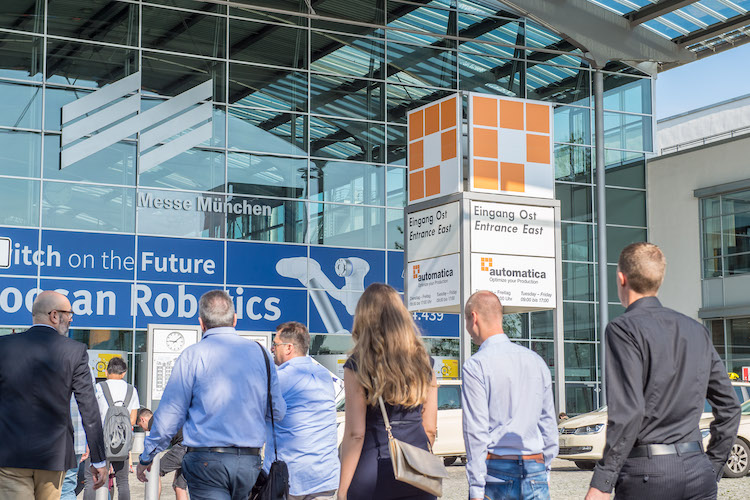 Organisers of the biennial Automatica event say this show has beaten all previous records.

Automatica 2018, which took place from June 19 to 22, reached new highs in the two main categories:

“The strong results show that the history of automation and robotics is being written here in Munich.”

“There was a 20 percent increase of visitors other countries,” he says. “This shows that the Automatica is becoming increasingly important on a global level.”

Industry Representative Dr Norbert Stein, chairman of the board of VDMA Robotics + Automation and managing director of Vitronic, says he is convinced by the trade fair concept.

“Automatica has once again set standards,” says Stein. “It shows the future of automation and provides knowledge for orientation at the highest level. Visitor quality and quantity: outstanding!”

Per Vegard Nerseth, managing director of ABB Robotics, explains the importance of Automatica for his company.

“Automatica is the most important trade fair in the area of robotics and automation,” says Nerseth. “A lot of value is put on future-oriented technology here. This is the main reason why we are here in Munich.”

New names, products and concepts enriched the exhibition portfolio. The motto is: Digitalization, easy operation and greater flexibility in production with the aim of opening up new application areas.

Ralf-Michael Franke, CEO of the Factory Automation Business Unit at Siemens AG, commented on the trade fair premiere of his company: “Our digital enterprise portfolio fits ideally to the automatica motto ‘Optimize your Production’.

Siemens provides end-to-end software and hardware solutions, with which the entire value chain can be integrated and digitalized. As a result, machine manufacturers and users can already use the benefits of Industry 4.0.”

Wilfried Eberhardt, chief marketing officer of Kuka, sees a decisive advantage for the trade fair in the networked production world.

“The topic of IoT is part of intelligent automation,” says Eberhardt. “Automatica is the only trade fair in the world that focuses on it. That is why it stands quite clearly for innovation. Trade visitors get a glimpse into the future here.”

With new exhibitors, specialist lectures and demonstrations, the topic “IT” plays a central role at the trade fair. Sixty-four companies exhibited from the IT environment within the framework of the IT2Industry area.

Dr Christian Schlögel, CEO of Connyun, says: “Automatica 2018 has shown the technological opportunities that companies have for implementing their digital transformation.

“It is impressive to see the great range of industrial loT developments and which potential is still available.”

A major growth driver for the future: the connectivity between machines. The decisive factor for this is the standardization of communication interfaces.

The importance of collaboration between industry participants was demonstrated by the OPC UA Demonstrator from the VDMA Robotics + Automation Association, in which 31 companies are participating.

Dr Horst Heinol-Heikkinen, chairman of the VDMA OPC vision initiative, says: “Interoperability is the key to differentiating our products in the networked world of Industry 4.0. OPC UA is the designated standard to let machines speak the same language in the intelligent factory of the future.”

Collaborative robotics is conquering the market at rapid pace and opening up almost unlimited automation possibilities.

From the sensor via the cobot to a complete installation, direct interaction between man and machine is gaining increasing acceptance.

The technological developments are thanks to close collaboration between science and industry. Munich is claimed by Messe München to be the international meeting point for this.

Professor Oussama Khatib, from Stanford University, says: “Automatica, this year, opens a wide window on the emerging applications in the robotic industry.

“Robots with increased capabilities working in closer proximity with humans are being built for real-world applications, a testimony to the fruitful collaboration and technology transfer between research and industry.”

People in the smart factory

The question that goes beyond the trade fairis, “How will people work in the future?”

With the special exhibition “People in the Smart Factory”, the professional association VDMA Robotics + Automation sought to make the work world 4.0 tangible.

The VDMA showcased technologies they say are integal features of the smart factory. They include:

Patrick Schwarzkopf, managing director of VDMA Robotics + Automation, says: “Jobs will be more attractive and ergonomic. The respective strengths of man and machine are complementary.

“This opens up a great opportunity for a better workplace design. This topic sets the tone of Automatica as hardly any other fair.”

Artificial intelligence is seen by many as the next technological leap. So Automatica communicated relevant expertise with numerous talks on this topic.

AI-based data analyses can give industry an enormous increase in growth. Interdisciplinary dialog is crucial here, says some experts.

“To use business potential successfully, automation and IT providers must collaborate much more closely together with AI experts in future,” says Ralf Bucksch, technical executive of Watson IoT Europe, IBM sales and distribution, software sales.

Start-ups and the promotion of young people

With the Makeathon, Integration Islands and Escape Game formats, the trade fair addresses young people in a targeted manner. More than 120 Makeathon participants and 200 students brought a breath of fresh air to the industry.

Trade fair managing director Senger sees an important issue in this respect: “The shortage of skilled workers is, unfortunately, a daily reality in industry and SMEs now. To address this problem, we will continue to strengthen our commitment in the area of promoting young, talented people.”

Top grades from visitors and exhibitors

The positive mood in the industry could be felt everywhere: Ninety-six percent of the exhibitors and 98 percent of visitors evaluate the trade fair as “excellent”, “very good” or “good”.

Messe München says Automatica is “the business platform for making concrete investments”, and claims that 97 percent of the visitors confirmed this.