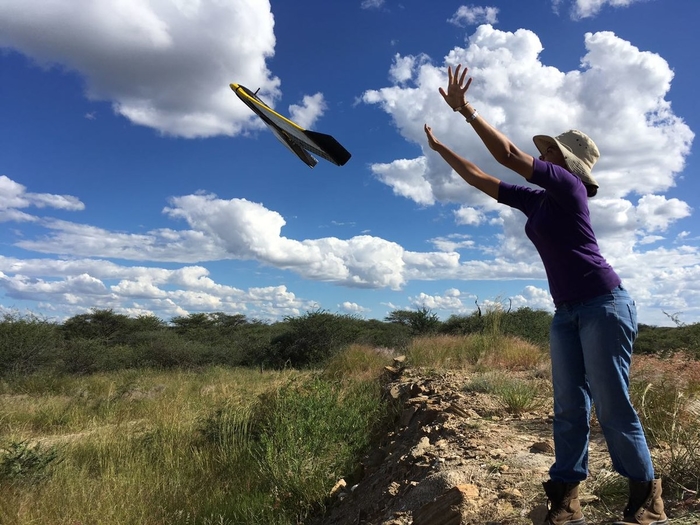 New commercial and research roles for unmanned vehicles. By Peter Feuilherade for the International Electrotechnical Commission

History provides many instances of technologies developed for military application being spun off and used in the civilian sector for different, broader uses and at lower prices.

Drones and other unmanned powered vehicles are a good example.

However, strong winds blew many of the “flying bombs” back across the city, and they fell on Austrian troops encamped on the mainland.

Reconnaissance UAVs were widely used in the Vietnam War, and the first fully-autonomous battlefield drone was developed in Israel in 1973. In the last two decades, the US, the UK and Israel, among others, have used drones to carry out targeted killings.

Now, drone technology has spread well beyond the confines of the military.

Drones are used for hundreds of commercial applications, among which environmental research and conservation are growing sectors, particularly as many models are now small and relatively cheap.

Environmental monitoring robots, meanwhile, have been under development since the 1990s.

Drones, maritime and terrestrial robots, used individually or deployed to work together, can gather data to assess and monitor the quality of the environment, particularly in areas that are too dangerous to access.

Several IEC Technical Committees and Subcommittees cooperate on the development of International Standards for the broad range of electrotechnical systems, equipment and applications used in drones and robots.

Saving time and money with drones

To study the effects of climate change, still images and video can be pieced together to form 3D representations and maps that are used to predict events such as sea level rises in coastal areas.

As important elements of civilian early warning systems, drones equipped with cameras and sensors for transmitting images and data on water levels, temperature, humidity and other parameters can play a vital role in helping to identify flood risks and other natural disasters.

Light-spectrum filtering captures information on physical factors such as heat, radiation and noise level, as well as the sources and types of contamination and pollution.

Environmentally-related uses for drones include collecting data on endangered species and on erosion and deforestation, monitoring active volcanos, assisting in demining operations, assessing nuclear power stations after accidents and surveying potentially dangerous areas such as abandoned mines and wells.

The use of drones and robots for inspection work at decommissioned power plants and mines has demonstrated both the financial savings and the speed and safety aspects they offer over traditional methods.

As well as flight controllers and electronic speed controllers, equipment common to battery‑powered drones includes an internal global positioning system module which tells the aircraft where it is and where the cameras are looking at all times, and a microcontroller to allow the data coming from various connected sensors to be processed in real time.

On‑board datalink communications allow navigation, piloting and camera operation instructions to be sent to the drone and positional and live video streams to be downlinked from its camera systems.

IEC TC 47: Semiconductor devices, and SC 47F: Microelectromechanical systems, are responsible for compiling International Standards for the semiconductor devices used in sensors and MEMS essential to the safe operation of drone flights. These include accelerometers, altimeters, magnetometers (compasses), gyroscopes and pressure sensors.

Motion sensors such as accelerometers, gyroscopes and compasses are used to navigate and accurately track a drone’s position and keep it balanced. Other sensors for obstacle detection and collision avoidance include monocular vision, ultrasonic (sonar), infrared, Light Detection and Ranging (LiDAR), time-of-flight (ToF) and vision sensors.

Multispectral, vision, ToF, LiDAR and photogrammetry camera sensors open up new uses for drones. Photogrammetry is a technique that pulls together the still images and video collected by drones from scores of oblique, top-down and lateral perspectives into image mosaics which are pieced together to form highly accurate 3D representations.

Other specialist sensors can be added for specific tasks. For instance, highly sensitive chemical-detecting sensors in drones used for inspecting gas and oil pipelines allow mechanical faults and defects to be detected and repaired quickly and efficiently.

Navigant Research noted in a 2017 report that advanced battery chemistries like lithium‑ion (Li-ion) have seen price declines over the past several years and are used increasingly in unmanned powered air, ground and maritime vehicles.

“They will play a key role in the further proliferation of unmanned aerial vehicles, unmanned ground vehicles, and unmanned underwater vehicles,” Navigant predicts.

As in the case of drones, robots developed for military purposes predate their industrial counterparts.

The Soviet Union and Germany produced a series of wireless remote-controlled unmanned robotic tanks in the 1930s and early 1940s, while modern industrial robots were created from the late 1940s and evolved into machines capable of carrying out industrial tasks in the 1960s.

The technologies that armed forces used to build remote‑controlled or autonomous ground, maritime and underwater vehicles to deploy in theatres of war have enabled the development of robots that can be used in environmental protection roles.

These include dealing with toxic spills in mines, cleaning up pollution on beaches and public areas and monitoring undersea environments.

A notable example was the use of maritime robots to combat and measure the environmental damage caused by the oil spill in the Gulf of Mexico from the Deepwater Horizon platform in 2010.

Maritime autonomous vehicles use a range of technologies including sonar, cameras, sensors, magnetic detectors, laser scanners, water quality instruments and other specialist equipment, depending on the type of environmental data required to be collected.

Small autonomous ocean gliders, or underwater gliders, use wave motion and solar power to travel thousands of miles at sea without fuel.

These unmanned craft are equipped with multiple sensors and are used for both military and non-military applications.

The latter include offshore oil and gas operations and scientific research such as water sampling, environmental monitoring and acoustic surveillance.

On a smaller scale, autonomous marine robots or “aqua drones” powered by rechargeable electric batteries have been developed by inventors like Richard Hardiman, who runs a project called WasteShark, to cruise silently around urban waters such as harbours, marinas and canals and collect marine litter without disturbing fish and birds.

Aquabotix, a company with operations in Australia and the US which makes unmanned underwater vehicles, has developed hybrid (surface and underwater) vehicles capable of operating in multiple formations, or “swarms”, on the surface of a body of water or diving up to 50 m.

The robot submersibles are fitted with customized sensors that can work together and can be used for data‑gathering operations such as marine ecological surveys, as well as in defence applications.

Surface robots have found an important niche operating in radioactive and toxic environments.

After the Three Mile Island nuclear accident in the US in 1979, robots were used for photographic and radiological inspection, concrete sampling and decontamination.

In 2017, six years after the accident at the Fukushima Daiichi nuclear power plant, Japanese engineers deployed an underwater robot fitted with radiation-hardened materials and sensors to find the melted uranium fuel inside one of the flooded reactors at the destroyed site.

The shoebox‑sized robot used small propellers to hover and glide through water, mimicking the movements of an aerial drone.

The US Department of Energy plans to use customized autonomous robots to identify uranium deposits as part of the decommissioning of a closed uranium enrichment plant in Ohio.

The robots will be fitted with LiDAR sensors and fish‑eye cameras to detect and manoeuvre around obstacles, while other sensors will measure radioactivity.

As well as radiation-resistant robots, other types of robots being developed for dangerous environments include explosion-proof robots for use in coal mines, biochemical sampling robots and fire-fighting robots.

A number of IEC TCs and SCs are involved in drawing up International Standards for the electrotechnical systems, equipment and applications used in robots.

Drones and robots working together

Integrating the capabilities of drones and robots opens up greater opportunities for environmental protection as well as research such as the ability to collect imagery both under and above water.

The European Union has funded a series of projects involving cooperation between various types of robotic vehicles with different capabilities and characteristics to track and take action against oil spills.

The fleet, consisting of aerial drones, autonomous underwater vehicles and unmanned surface vehicles, has completed a series of training exercises in the Adriatic and Mediterranean Seas since 2014.

Despite the many new applications for unmanned autonomous vehicles in environmental monitoring, this sector still accounts for only a small part of all sales of commercial drones and robots.

Where commercial drones are concerned, different market research companies offer widely varying forecasts of global market values over the next few years, because some predictions include sales of consumer drones.

Transparency Market Research predicts that the global commercial drones market will grow at 13.8 per cent CAGR from 2017 to 2025, with revenue reaching $8.8 billion in 2025.

Demand for drones and robots designed specifically for use in environmental monitoring is set to grow as governments around the world launch more initiatives to assess and reduce pollution.

About the author: Peter Feuilherade is a journalist and a consultant. This article was first published on the website of the International Electrotechnical Commission, and is republished here with permission. The IEC is a non-profit, non-governmental international standards organisation that prepares and publishes international standards for all electrical, electronic and related technologies.