It probably looks more stylish than your average bin, and it’s definitely a whole lot smarter.

What’s being described at the world’s first smart trash can is being developed in Poland.

Its makers, at a company called Bin-e, say the “intelligent bin” will not only facilitate work in an ecologically friendly environment but also allow us to save time devoted to garbage segregation at work. 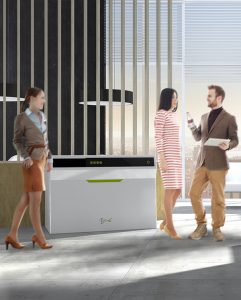 Does anyone even segregate garbage unless it’s their job? Anyway, it’s not exactly the most glamorous job in the world, and it’s about time someone saved people from this chore.

Bin-e says it has been working for more than a year on the smart trash can, which now recognises, categorises, sorts and stores the rubbish as and when it is deposited.

The product will soon become commercially available and could help make a difference to waste problem in Europe.

Some 213 million tons of garbage are generated each year in Europe, and only 30 per cent of that is recycled. “That is definitely not enough,” says Bin-e.

The company’s smart trash bin Bin-e solution was developed by Jakub Luboński and Marcin Łotysz, who say it solves the sorting problem by reducing the volume of waste we produce.

Marcin Łotysz, CTO, says: “Bin-e is a device for automatic waste segregation. Its functioning is based on a combination of mechanical, electronic elements and software with elements of artificial intelligence.

“From user’s perspective – nothing changes. We return to the traditional rubbish disposal, to the situation before a notion of segregation. We throw away waste and that’s it.

“The rest is done by the machine, which recognizes objects and classifies them to the proper categories and then compresses. An important element of the system is its integration with logistic solutions used by companies that deal with waste management.”

Łotysz says the prototype of the device showed them that the finished product could cope with the challenges, but development work is continuing to make additional improvements.

If they can release the product commercially, there is likely to be demand from all corners of the continent and beyond.

Luboński, CEO, says: “The real demand has been confirmed by dozens of potential customers not only in Poland, but most of all in Germany, the UK and the Netherlands.

“We managed not only to create environment friendly solution but also one that is profitable for companies. Depending on the regulations on a particular market, companies can save on waste disposal even several hundred percent per year.

“Our belief in the value of solution is also strengthened by the partners with whom we plan to develop the product and build new distribution channels. All of this is the result of long months of hard work and many sacrifices. Our families know it best.”