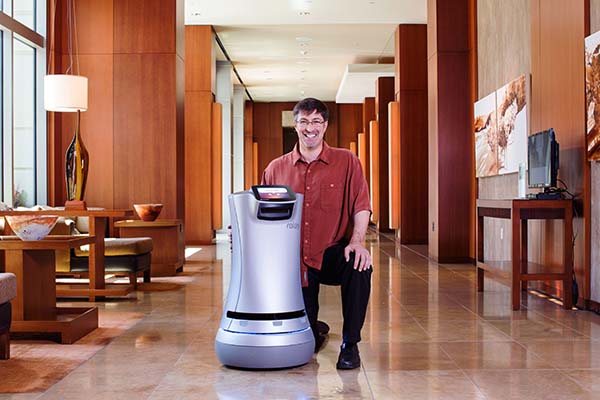 Just ahead of appearing at the Consumer Electronics Show, Steve Cousins, CEO of Savioke gives Robotics and Automation News an exclusive interview

Some months ago, just after we started this website, we published a story about a new robotic concierge for hotels, launched by Savioke.

The company calls the robot “Relay”, although its buyers often give it nicknames – Dash, Botlr, and Wally are just some examples.

Relay is not really a concierge – we just like that word… concierge… makes our website sound sophisticated. But anyway, the robot is smart enough to navigate its way within complex hotel interiors, with all their zig-zagging corridors and winding hallways, as well as their lifts with the slight gaps and uneven surfaces at the entrances.

These navigational challenges would of course not be a problem for most humans – we wouldn’t even think about them. Most of us are fortunate enough to be able to get around in hotels or in any other buildings quite easily – all the manoeuvring involved doesn’t present any difficulty, no matter how complex it may be.

However, for today’s robots, these journeys are fraught with innumerable possibilities for mishaps small and large. These are the computing adversities which have been successfully overcome by Savioke, a number of whose robots now work at hotels in different locations since we reported about them a year ago.

It’s been a good year

In an exclusive interview with Robotics and Automation News, Steve Cousins, CEO of Savioke, says it’s been a good year. “It’s going very well,” he says.

“A year ago, we raised Series A funding. Since then, we’ve been expanding in hospitality, and also looking at adjacent markets.

“We’ve had really good success at articulating the value proposition in hotels. And because we’re in hotels and people can see the robots and try them out, a lot of people from related markets are saying, ‘Okay, I can use this product’.”

The obvious “adjacent” markets would be office buildings or even residential apartment blocks, where the advantages of having a robot deliver documents and small parcels are obvious.

The company has already reached a deal to install its Relay robot in one residential apartment building, the Crescent Heights 10,000 in Beverly Hills, and the machine will also soon be installed in other apartment buildings.

One of the reasons for the success of the Savioke – pronounced like “savvy oak” – robot is that it looks really good. It doesn’t appear out of place or upstaged at even the top hotels – indeed its space-age textures and practical shape often elevate its surroundings in terms of their aesthetics, making it seem more attractive that it would without the useful little machine.

“We’re a very user-standard robotics company,” says Cousins. “One of our founders is an industrial designer, who is just awesome – Adrian Canoso.

“As a founding team, we looked really carefully at the use cases, what the system can do for people, and how can we make it just dead easy to use.

“And then Adrian took those concepts and turned them into a robot that comes across as very user-friendly and works well.

“One of the things that sets us apart is that when we set out, we realised that almost all of our customers and end-users are going to be people staying at hotels who have never used a robot before. So we had to make it work every time for a first time user, and that design goal drives ease of use.

“And then the other thing we see often is the kind of clientele you find in hotels is varied, and we sometimes see very young children with no shoes on dancing around the robot.

Robots are usually employed to apply paint to bodywork, although not always – sometimes humans get those jobs. After all, the paint and finishing has to please the eyes of humans at the end of the chain.

“We pay a lot of attention to the paint that we use,” says Cousins. “So, the top of the robot has a soft-touch paint, which feels nice to the touch.

“It has a lot of sensors on it, and the sensors are there to both help it know where it is, to track the features of the building that it’s in, and to see obstacles in real-time and respond to them.

“One of our core competencies is moving safely around people, moving gracefully in a way that’s predictable, no sudden movements… and all that also makes it fun to watch.”

As clever as robots undoubtedly are, and as productive and efficient as they have proven to be for some business sectors, such as manufacturing, they are not as ubiquitous as one might expect them to be.

There are many reasons for this, and one can speculate for a long time on the matter. But sooner or later, hotels run entirely by robots will be opened.

Robot hotels have already landed in Japan, where exverimental establishments such as the Weird Hotel welcomes its guests using scary-looking dinosaurs and humanoids as receptionists, and a trusty industrial robotic arm for storing and retrieving hotel guests’ personal items.

It’s obvious where Savioke’s Relay robot would fit into this team of non-human robot workforce at such hotels.

But the question is, do people want entirely robot-run hotels, or even partly-robot-run ones?

Cousins describes Savioke’s experience over the past year and looks ahead to the future. “I think it varies according to region of the world,” he says.

“In the US, what we see is that some hotels tend to believe that their customers want hands-on, or human, service all the way through – the ‘human touch’.

“But for hotels that perhaps are brands or chains – for example, your Marriotts, Hiltons, Hyatts and so on – what we see is that people care a lot about cost and service. And in those hotels, we’ve had a decent amount of uptake.

“The interesting thing about that is that, while originally the hotel may have thought, ‘We think we need to have a person delivering things to the room – that‘s going to make a big difference’, we found a lot of hotel guests actually prefer a robot delivery.”

“So for all those reasons, getting a delivery from a robot seems to be so compelling that people tend to write about it on social media, which attracts more people to the hotel,” says Cousins.

To date, Savioke’s hotel robots have made several thousand deliveries at hotels such as the Crowne Plaza Hotel, in San Jose Silicon Valley (see video below). And if the public’s inexplicable aversion to dinosaur hotel receptionists can be overcome, we may be seeing a lot more robots like Relay getting on with running a hotel without humans.